Broker association exec offers thoughts on returning to the office

How brokers view their work is changing, and brokerage principals need to keep pace with these new expectations, says an executive at Ontario’s broker association.

Employers in industries across the board are figuring out how (and whether) their staff will return to the office. If brokerages haven’t already started planning their return to the office, they need to initiate that process soon, says Brett Boadway, chief operating officer at the Insurance Brokers Association of Ontario.

“I think some sort of flexible work is going to be the expectation — not the exception — going forward,” she told Canadian Underwriter.

She cited several reasons to support her view. For example, apart from the standard argument that much of a broker’s job can be done from home without having to commute to the office, the world is still going to take time to adjust back to a pre-pandemic state. 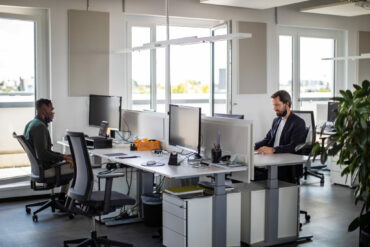 A runny nose illustrates the point. Before March 2020, workers would come to the office with a runny nose, thinking it’s no big deal. They would blow their nose as necessary and get on with their day.

That may no longer be the case, Boadway observed.

“Even to use the simplest example, I think it’s going to take a while [to return to] a world where people can just come to the office with a stuffy nose, or you can send your kid to school with a stuffy nose,” she told Canadian Underwriter. “I think there’s still going to be some time, even if it’s not COVID, [when] that becomes something that you can do [and] it’s [considered to be] acceptable behaviour.”

In the above scenario, the person may feel well enough to work, but it may be not ideal to have them at the office. And so, rather than losing a member of the team for a day, offering a flexible work arrangement make sense.

“I don’t think any employer wants their staff taking a sick day every time they have a little bit of a stuffy nose,” Boadway said. A flexible work arrangement would allow the sick person to remain productive while working from home, she added, while preventing a virus from circulating through the workplace.

Related Story: Your work is about to change: Why working from home won’t be the same

That said, office location may play a part in how much flexibility a company may be able to offer. It’s a different call for a company in a city centre, versus one in a smaller town, as she observed. IBAO is tackling the challenge of operating its office in downtown Toronto, where many commute to work on the subway.

“I think that’s a very different set of circumstances than if you’re in an office where everybody drives their own car to work,” Boadway said. “What [taking a car] means is that you can place a number of controls in [place] for when [the employees] actually enter your building, and how you manage it once they’re in the building. But if the majority of staff are taking public transit to work, it reduces the ability to control and reduce exposure.”