How much more you say you’re working from home

Three in five Canadian property and casualty insurance professionals report working more hours from home than when they were working in the office, according to a recent Canadian Underwriter poll.

However, a number of readers wrote in open-ended responses that they’re fine with a longer workday if they don’t have to commute to the office, or have the ability to break up their workday.

Fifty-eight per cent of respondents to the Working From Home survey said they were putting in more hours. On the flip side, 37% said they weren’t.

For those who said they were working more from home, just how much are they? More than two-in-five (43%) said they’re working two hours extra per day, with another 34% saying they’re spending an extra hour per day at their desk at home. Another 12% said they’re working four more hours every day, while 11% said work demands meant an extra three hours of work every day.

When it comes to stress, many reported through open-ended responses that they are feeling it from not just their job duties, but tasks at home.

“With the kids schooling from home as well, this has added quite a bit more to my daily duties,” wrote one respondent. “I am a full-time employee, however being accessible to the kids also makes me: A mom, short-order cook, waitress, teaching assistant and maid.” 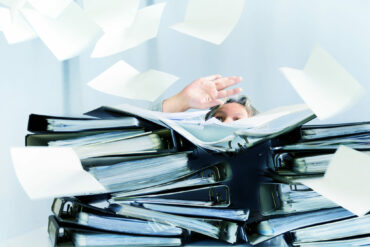 Others noted the lack of boundaries between home-life and work-life are adding to the feelings of stress and burnout.

“Work/life boundaries are blurred when working from home. Without a commute to end the day, it’s easy to get caught up in working longer hours,” said one respondent.

“Problem in maintaining a work-personal life boundary,” said another. “I also find that I don’t take any breaks at all while working from home. Whereas in the office you’d strike up chats with colleagues from time to time.”

That comment was echoed in a number of responses. “I just find that I don’t take breaks, lunch, etc. I just keep going,” said one reader.

“I feel I am spending too much time looking at my screen, opposed to getting up, walking around, getting a coffee, saying hi to people, or simply gazing out a window,” one respondent assessed. “For example, I went to the eye doctor and I need to get glasses.”

Some noted they were okay with working a little bit more each day if they didn’t have to commute — it’s a trade they’re willing to make.

“I do find I work more hours now but I will gladly do so for the convenience of working from home,” one person said.

“I am taking on more work in a virtual environment but that is offset somewhat by not having to leave to go to work,” observed another.

“Some days it is harder to separate, but even longer work hours are made up for by saving on commute time,” wrote a respondent. “Necessitated a need for a larger home with multiple home offices, once the right workspace is set up, it has been much better.”

One reader noted that they were concerned that the increased workload will become the norm when employees are called back to the office. What they hope managers remember is that staff didn’t have to commute or travel, or face distractions at the office, all of which combined to allow employees to take on more work.

One respondent offered advice on how to tackle feelings of stress or burnout.

“Once I realized I needed to ‘shut off’ at my regular work time, it helped,” they wrote. “I was working at all hours — because it was here and set up. Once you discipline yourself, just as you do in the office, it helps relieve burnout.”