Post-Dorian claims adjustment: has the industry resolved its capacity issues?

More than 100,000 Atlantic Canada homes and businesses were still without power three days after Dorian hit Nova Scotia, but the latest hurricane to hit Canada’s east coast should be easier for the industry to handle than the May 4 wind storm that hit central Canada in 2018, one industry executive suggests.

A catastrophe that brought wind gusts of 120 km/h to Ontario and Quebec May 4-5, 2018 was the most expensive event that year for the industry, causing more than $500 million in insured losses.

“We were tapped out – not only from an adjusting perspective but from a contracting perspective,” Kumar Sivakumaran, vice president of national operations at independent adjusting firm ClaimsPro, said Monday in an interview. He was contrasting the May 4, 2018 event with the aftermath of Hurricane Dorian in Atlantic Canada. 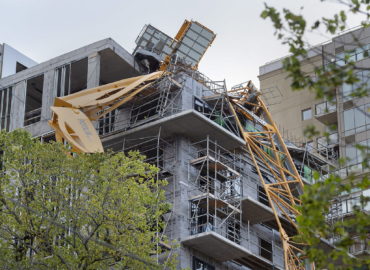 A toppled building crane is draped over a new construction project in Halifax. Hurricane Dorian brought wind, rain and heavy seas that knocked out power across the region. THE CANADIAN PRESS/Andrew Vaughan

“There were not enough contractors in the marketplace to fill the need,” Sivakumaran said of last year’s early May storm in Ontario.

“This time around, I would say, from an adjusting perspective, and from a restoration perspective – there are significant resources available, so I don’t think you will see as big of an impact [in Atlantic Canada] as we had in Ontario last year [following the May 4 wind storm].”

“I think this industry should be ready for this event,” Sivakumaran said of Dorian.

NHC defines hurricane as a tropical cyclone in which the maximum sustained surface wind (a one-minute average) is 119 km/h or more.  The Canadian Press reported that in the Halifax area, wind gusts at one point reached nearly 150 km/h.

The high winds caused enough damage to put 80% of homes and businesses in Nova Scotia in the dark at one point. As of Tuesday morning, more than 100,000 Nova Scotia Power customers were still without electricity and the company said it would be Thursday before everyone is reconnected, CP reported.

Toronto-based Catastrophe Indices and Quantification Inc. (CatIQ), a sister company to MSA Research, has declared Dorian a Cat, meaning it will cost the property and casualty industry at least $25 million. But CatIQ cannot comment on what the total cost could be until the first estimate is released in a couple of weeks, CatIQ managing director Laura Twidle told Canadian Underwriter Monday night.

Insurers will be handling a lot of residential claims from Dorian in-house, Sivakumaran predicted.

ClaimsPro is prepared to bring adjusters in to Atlantic Canada from other provinces. Sivakumaran said he does not anticipate any issues in Atlantic Canada in getting out-of-province adjusters licensed. “Usually, during a catastrophic event, they expedite the licencing process,” he said, referring to regulators in Atlantic Canada. “If we need extra capacity, we have been told that they would expedite the licensing process to make sure there is no gap in the services we provide to our customers.”

Claims from Dorian will probably be handled much differently than those from Hurricane Juan, which hit Atlantic Canada in 2003. At that time, personal lines adjusters would have to go to the site of pretty much every property claim, Sivakumaran said.

Today, in some cases, clients can send pictures to their insurers who can review it and in some cases pay a cheque. This could happen in up to 90% of personal property claims, he suggested.

“The majority of insurers are looking to speed up the process, settle the claim, and give the insured a settlement cheque or indemnity cheque to repair the place if they don’t want to go through their network of preferred contractors,” said Sivakumaran.

More News
Related
The impact of Dorian on Canada’s P&C industry
Did Dorian create a capacity issue for claims adjusters?