How should you approach risky projects? 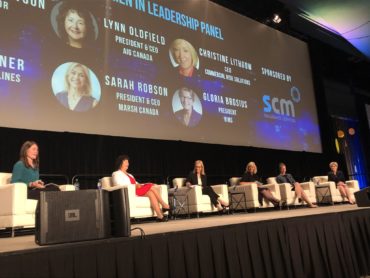 Debating on taking that risky project others seem to be shying away from? One insurance leader believes you should jump all over it.

There was a point in her career when people told Christine Lithgow to not take on a project because they believed it was too dicey. She was moving up the ranks and the risk was just too great, they said, and it would kill her career if things went sideways.

That didn’t faze her. She took on the project. In the end, the fears of her peers were justified – the project failed.

But that didn’t derail her career. In fact, it did wonders for it.

“Actually, the project failed and I got promoted to CEO because I got exposure to the global CEO as I was working on that project,” she said at the RIMS Canada Conference in Edmonton recently. “The failure of the project actually helped accelerate my career.”

So when the chief executive officer of commercial risk solutions Canada at Aon Risk Solutions is asked for advice on whether to take risks, she’s all for it.

“One of the things I say is: Take the stretch roles. Take the scary ones. Don’t be afraid,” she said as part of the Women in Leadership panel that also featured AIG Canada’s Lynn Oldfield, Sarah Robson from Marsh Canada, Yvonne Steiner of Zurich and RIMS president Gloria Brosius. The event was held Sept. 8-11 at the Edmonton Convention Centre and drew more than 1,400 people.

No one is ever going to be entirely ready to take on a new role, Steiner noted. Let people make mistakes. “Experience is the best teacher, but failure is also an equally great teacher.”

Part of what feeds into the fear of failure for women is being tentative to make the leap. How much would it hurt women if they’re not capable to take on expanding roles, asked moderator Lana Cuthbertson.

“Not any more than it hurts the men who are being put in positions who are incapable. That’s happened forever,” Robson answered. “So you do exactly the same thing – you deal with it. You either train people or you exit them out of the role if they’re not the right people. We need to be more prescriptive about moving women into roles and about helping moving women into more senior roles.”

To get there, Brosius said women need to do one important thing: Stop apologizing.

“Women are famous for apologizing for no good reason,” she said. “More than anything, what we need to start doing is letting your light shine. You can be a leader. Let your ideas and your bright lights shine through so that you can grow and develop your career more fully.”

More News
Related
She captured women’s feelings in the workplace with this response
What risks are most worrying?