Sports heroes: one way to score big with your marketing 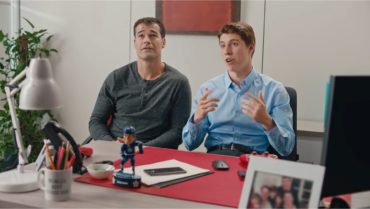 A screengrab of a digital ad from Intact’s series featuring Mitch Marner, right, of the Toronto Maple Leafs. Former teammate Patrick Marleau also made an appearance.

When it comes to marketing, brokerages and carriers like pairing up with pro sports teams and athletes.

For Waterloo, Ont.’s Aha Insurance, which launched in 2017, partnering with a professional sports team seemed like a perfect way to create brand awareness. The brokerage has been working with the Toronto Argonauts of the Canadian Football League since the 2018 season.

“We were looking for an alignment with a more established brand that would help add value in terms of credibility, not to mention the visibility that comes with that alignment,” said Khari Gaynor, vice president of digital marketing at Aha Insurance.

It also helped that the Argos were supporters of similar off-the-field initiatives like SickKids Hospital in Toronto. Aha participates with the Argos in this philanthropic endeavour.

Similarly, Intact Financial Corporation highlighted the work of current Toronto Maple Leafs winger Mitch Marner through his charitable program, the Marner Assist Fund. It supports children organizations like SickKids, Canadian Tire’s Jumpstart Foundation and others. Intact Insurance is a sponsor of the Marner All Star Invitational, which draws fellow NHL players to raise money for the fund.

“As a brand ambassador – and Intact client – Mitch is a perfect fit for Intact Insurance given his incredible ability on the ice and, more importantly, the way he genuinely connects with people off the ice,” said Robin Monniere, vice president of marketing at Intact.

The insurer also created a series of humorous digital spots that feature Marner picking up a summer job at Intact, featuring interactions between him and his new colleagues.

A partnership can help round out a corporate strategy. In social media circles, leveraging partnerships can add a human and fun element so as not to bombard followers with insurance-specific content.

It shows that “we do have other interests, we are real people and we look forward to the weekend and watching the game,” Gaynor said. “It just makes us a little more human and takes the edge off the insurance and gives us eyeballs that we otherwise wouldn’t get.”

They’ve seen spikes online based on Argos-related promos and giveaways while at the same time generating leads. Gaynor estimates between 30-40% of those who enter contests end up getting quotes from Aha. “It’s not as if they’re entering a contest and they’re not really interested in anything we offer.”

The brokerage refuses to fall into the trap of counting the number of policies they’ve sold as a result of their deal with the Argos. It’s about planting the seeds for the future.

“When Aha Insurance is featured on the uprights, we know that someone isn’t going to look at that and suddenly buy from us,” Gaynor said. “But that’s one brand impression and it reinforces who we are. We look at it like that, like a way to be community partners.”

Intact also has CFL ties through its belairdirect brand. It signed a national deal with the league in July 2017, after supporting individual teams in previous years, Monniere said. It has also worked with Speed Skating Canada since 2006, helping “local speed skating clubs develop their young athletes to become the next generation of Olympic hopefuls.”

When it comes to wins and losses, the former may help with drawing more eyeballs, as evidenced by the Toronto Raptors – who have a partnership with Aviva – as they won an NBA title. When Aha signed on with the Argos, the team had just come off a championship season. The 2018 campaign, however, went in the opposite direction as the Argos finished last. This year hasn’t been much better as the team is winless in its first two games.

Aha’s concern, however, is whether or not people are still coming out to the games at BMO Field and seeing their ads. So far, so good, Gaynor said.

“When we contest (tickets), we’re still getting crazy responses in terms of interest,” he added. “Is it that people like to have a good time? Maybe.”