How sports talk is good for company morale 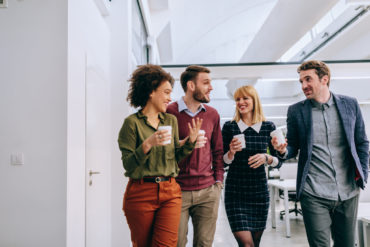 The Toronto Raptors capped off their season with an NBA Championship – and their win can help give your employees a little more pep in their step when they come into work.

It felt like everybody jumped on the bandwagon – almost 60 so-called Jurassic Park public viewing parties were set up across the country, nearly half the country was tuned in to some point of the championship-clinching game and millions hit the streets for the victory parade – and employers would be remiss to not use the excitement as a chance to help boost morale in the office.

Managers should encourage sports talk, according to global staffing firm Robert Half. A recent survey found that 68% of managers said major sports event like March Madness and the Stanley Cup playoffs – which also recently wrapped up – have a positive impact on morale. More than half also said they see productivity benefits.

Bosses shouldn’t discourage chitchat around sports, rather they should embrace them. As favourite teams extend their runs in the postseason, Koula Vasilopoulos, a district president for OfficeTeam, a division of Robert Half, encourages companies to look for opportunities to have some fun and help employees bond over sports.

“Rather than downplay excitement around major sporting events, many organizations welcome the distraction as an opportunity to build team engagement and camaraderie,” said Vasilopoulos. “As long as employees respect company guidelines and work priorities, fun activities like jersey days or cubicle decorating contests can help lift morale without hindering productivity.”

The U.K.-based Social Issues Research Centre (SIRC) did a study on the impact of sports in the workplace and also found that conversations between employees – managers and staff – and even with customers “can have a positive impact on boosting morale and improving mood, motivation and productivity in the working environment.”

According to its study, nearly two-thirds of men and more than half of women said the success of their sports team impacts their approach to work. Just 3% said it’s a distraction and take away from their productivity.

Respondents to SIRC said employers could be more encouraging of watching sporting events together while also organizing team sports for employees to participate in together.

“For the passionate followers of sport, sporting conversations are an integral part of day-to-day working life … Talking sport at work fulfils a host of functions, not least improving communication among team members, breaking down hierarchical boundaries and improving customer relations,” SIRC said in its report.

Many employers seem to be on board with allowing their staff to show off their fandom. Two-thirds of them told Robert Half that they organize sports-related festivities with friendly competitions (37%) and wearing team apparel (34%) at top of the list of activities offered.