How the cat season so far compares to 2018

It seems that the Canadian catastrophe season is off to a strong start, with five events so far this quarter compared to the normal one.

“I will say that we have had an anomalous start to the year,” said Laura Twidle, director of catastrophic loss analysis with Catastrophe Indices and Quantification Inc. (CatIQ). “The number of events is well above normal for the first quarter.” 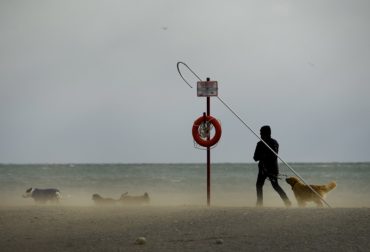 A dog walker fights the wind along with blowing sandy conditions on Woodbine Beach in Toronto on Monday, February 25, 2019. THE CANADIAN PRESS/Nathan Denette

On Monday, data from CatIQ revealed that a two-day winter storm in late February that caused widespread power outages and damage across much of southern Ontario cost Canadian insurers over $48 million.

Damaging wind gusts, freezing rain and blizzard conditions began on Feb. 24, with the most significant wind damage in the Niagara and Hamilton regions. Wind gusts reached 80 to 115 kilometres per hour, peaking at 128 km/h in Port Colborne. Hydro One reported that power outages affected more than 150,000 customers across the province, the Insurance Bureau of Canada (IBC) noted in a press release Monday.

The storm began with freezing rain overnight on Feb. 24, following by a blizzard that dumped a foot of snow across northern Ontario. In the southern part of the province, rain preceded the snow, falling on deep snowpack and frozen ground, causing ponding and flooding.

The storm was initially compared to the costliest insured loss event of last year – the May 4-5, 2018 wind storm. However, that wind storm cost insurers more than $622 million. With wind gusts of up to 126 km/h, the storm swept through southern Ontario and Quebec, knocking out power for 600,000 hydro customers.

As the financial cost of severe weather rises, IBC is advocating that all levels of government increase their investment in mitigating the impact of extreme weather and building resiliency to its damaging effects. IBC is also campaigning for upgraded infrastructure to protect communities from floods and fires, improved building codes, better land-use planning, and incentives to shift the development of homes and businesses away from areas at highest risk of flooding.