How the industry’s reputation is faring during COVID

In a spirited debate about the insurance industry’s reputation during the COVID-19 pandemic, an insurance industry researcher said one big reason why some consumers don’t trust insurance companies is because when they submit a claim, they’re treated as if they’re criminals trying to put through a fraudulent claim.

Christian Bieck, France-based insurance global research leader at the IBM Institute for Business Value, made this observation Tuesday at The Future of Insurance virtual conference, organized by Reuters. In making his point, he cited statistics from a study he conducted during the summer on consumer attitudes.

“COVID is certainly changing the perception of customers in terms of what they expect [of their insurer],” Bieck said on a panel that included two prominent Canadian P&C insurance industry executives. “It really separates the wheat from the chaff in terms of customer experience of promises given and kept, or promises given and broken. One mindset of many companies in the industry…has always been to treat the customer, especially the client, as a suspect. And that’s something that won’t fly in the future.”

If insurers can change the customer experience, that would go a long way to reversing negative polling numbers, Bieck said. He noted that just 42% of consumers trust the insurance industry as a whole, while 58% trust their own insurer. 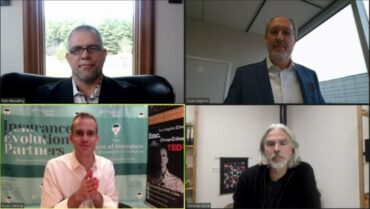 Clockwise from top left, Rob Wesseling of The Co-Operators, Louis Gagnon of Intact, Bryan Falchuk of Insurance Evolution Partners and Christian Biek of the IBM Institute for Business Value take part in the panel discussion “The Future of the Canadian Insurance Industry” during the Future of Insurance event.

Rob Wesseling, CEO of The Co-Operators, and Louis Gagnon, president of Canadian operations at Intact, disagreed with Bieck’s assessment of how the industry’s claims teams approach clients. Both noted their most loyal customers are often those who have been through the claims process.

“I’ve got lots of data that I could share that demonstrates the satisfaction level of those that have made a claim,” Wesseling said during the panel entitled The Future of the Canadian Insurance Industry.

Insurance is put to the test when there’s a claim. And when a client suffers a loss, “that’s when we shine,” said Gagnon. “Unfortunately — or fortunately — there’s just between 8-10% of people per year that are testing our product. The rest of the time people are paying. And that that’s really one part of the product that is difficult to explain. And that has an impact, I would say, on our reputation.”

Many of the problems the industry has around reputation can be traced back to communication, Wesseling suggested. “We don’t communicate very well about what’s included [in coverage], what’s not included, and why,” he said. “In fact, we do a really poor job of that. It’s about communication, both of the risks, and then communication regarding what’s covered.”

But that’s just the beginning. In fact, the industry isn’t communicating one of the biggest challenges it’s facing right now, Wesseling said. “We are increasingly unable to afford the physical risks that we’re exposed to. And we’re not telling anyone that. We communicate in terms of, ‘Well, the market’s hard, the rates have to increase, the underwriting has to change.’”

Commercial clients just don’t care about that stuff, he said. “Instead, we should be communicating…messages in terms of the risk, and in terms of the role that we can play in helping our clients manage those risks. And we’ve not done that as well as we could have.”

During the global COVID-19 pandemic, the industry’s reputation is keeping Gagnon up at night. For him, this is the time for insurers to show clients that their insurer is there for them during a time of crisis. If insurers don’t do that, they may lose customers when the customers’ economic fortunes improve.

“It could have a long-term impact, if we don’t do the right thing,” he said.