How to be really customer-centric: Lessons from the global insurance market

Canada’s property and casualty insurance industry should look towards the global insurance market for some insights about how to increase take-up rates, particularly among marginalized and low-income people, speakers said Thursday at the CatIQ Connect virtual conference.

In the global market, insurers will work with partners, non-governmental organizations, community finance institutions, and not-for-profit and community groups. These groups will in turn work with particular communities to really understand their needs, achieving success through speaking their local languages and knowing their customs, said Marjorie Brans, director of ecosystem impact at the School for Social Entrepreneurs Canada.

“You need to meet your customers with culturally appropriate solutions,” Brans advised during the session, Success Stories and Novel Approaches from Real-World Projects.

For example, in one community, a local theatre was hired. It adapted a fairy tale well-known to that particular community and conveyed the story with messages connected to insurance. “And then insurance was so much more understandable because it started with something that people knew,” Brans said.

Since personal insurance is regulated in Canada, the market is very supply-side driven and not very customer-centric, she said. But in countries with less wealth, “people don’t have insurance and they’re not going to buy insurance unless it’s attractive. The industry has had to learn how to be far more customer-centric.”

One example is a community bank that takes out an insurance policy on all of its lenders, Brands said.

This is an example of “meso insurance,” which, as noted by the World Bank Group’s Global Index Insurance Facility, covers “risk aggregators” such as banks, microfinance institutions, agribusinesses, or national export companies. The idea has been promoted in countries like Dominican Republic with the National Federation of Cocoa Growers. This kind of insurance protects against the mass default of its customers, and provides some lending relief by forgiving debts. 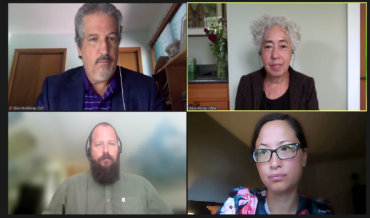 “Can you imagine the type of customer loyalty you would get?” Brans asked of such an arrangement. “It does create a deeper relationship with their insureds or customers.”

By comparison, “in Canada, there are fine-print exclusions, the terms are unclear, and the settlement of payouts is unclear.” By looking at global markets, the Canadian P&C industry could better handle risk communication and become more customer-centric, Brans said.

“There’s a real need to provide thoughtful protection for those people who have so little and, when disasters strike, are left with nothing at all,” said Sheila Murray, co-founder of CREW (Community Resilience to Extreme Weather). “How could insurance companies and municipalities work with community groups who are on the ground to get the message through and learn more about what’s needed and [provide] support?”

Murray used the example of one downtown Toronto neighbourhood of 26,000 people who collectively speak 100 languages and dialects in the space of a couple of city blocks. In 2018, an electrical fire led to the evacuation of everybody in one apartment building. When people moved back home after 19 months, many belongings were damaged and broken.

“Those who had very little now had even less, and the stress of building their lives back up. But they were home,” Murray said, noting that most tenants survived on income of $20,000 a year or less. “The question they would ask is, ‘Could there not be some sort of group insurance for low-income tenants?’”

This might include insurance that extends to cover people who live in apartments, but aren’t “officially on the books,” like community elders. “And could the city perhaps not find a means, a way, to subsidize some of the premiums that might be associated with group insurance?”

Moderator Glenn McGillivray, managing director of the Institute for Catastrophic Loss Reduction, said he recently spoke with a major reinsurer about an “innovative parametric product.” Speaking in general terms, McGillivray said the product could, for example, be bought by the City of Toronto for public housing residents that would cover all tenants for loss. “It could have a cap,” he said, and would get people some help immediately following a disaster such as a fire.