Early identification of potential insurance fraud schemes through automation can help prevent scenarios like the towing turf wars in Ontario from spiralling out of control, the CEO and co-founder of FRISS said Wednesday.

“I think it is crucial for the industry…to detect these fraud schemes earlier, before they scale up and…get to that mess [resulting in] the towing turf war,” said Jeroen Morrenhof, CEO and co-founder of P&C insurance fraud detection software company FRISS. “Now it’s towing, what’s next?”

Morrenhof acknowledged ongoing initiatives to tackle fraud spearheaded by organizations such as Insurance Bureau of Canada and CANATICS. “We really want to encourage the industry to double down on that, to do more, because I know these initiatives exist, [but] they’re not being leveraged to the full extent yet,” he said.

At the end of January, the Ontario Provincial Police released guidelines aimed at providing clear direction to tow operators, which was applauded by IBC.

Lack of regulation in the towing industry was blamed for creating an environment that allowed these turf wars to exist. Rival tow truck companies with ties to organized crime organizations engaged in a violent battle involving staged collisions and extensive insurance fraud. The turf war led to murders, attempted murders, assaults, arsons and property damage. 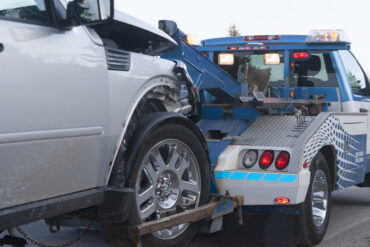 “When it comes to these organized crime [rings], they are looking at ways to fool the system, change their names, and change their identities to make sure we are not able to connect the dots,” Morrenhof said during the Canadian Fraud Prevention Month 2021 webinar hosted by The Netherlands-based FRISS. “We should do everything we can to connect the dots to be able to see how they collude.”

From a carrier perspective, automation can be used to help connect the dots, whether it’s through artificial intelligence to detect anomalies or a provider watchlist to make sure information is matching. “What’s also important is collaboration cross-carrier,” Morrenhof said.

FRISS works with five large carriers in Canada. “Although they are big, they still have a limited perspective on such a total network [of fraud],” Morrenhof said.

Automation helps in the early identification of fraud.

“Automation and screening of claims really is a must for quick identification of questionable claims,” said Jeff Cirino, customer success manager for North America at FRISS. “Automated systems that include initial screenings of claims using AI technology, coupled with expert business rules, network detection, text mining and image screening — they’re all critical for efficient and timely detection of these types of cases or claims.”

Automation processes should be in place to quickly identify potentially fraudulent claims, but they need to evolve alongside the fraud schemes, Cirino said. “This is an evolving process. There should always be continued learnings and adjustments to ensure proper indicators to specifically target what’s going on, and to focus on data points that really drive indicators for you to identify fraud,” Cirino said. “Things change — COVID is perfect example. It’s not enough to set automated detection systems and forget it.”

FRISS screens the claim throughout the entire process, including the first notice of loss and the underwriting streams. The company integrates that screening with an investigation, so an adjuster can quickly identify fraud through automation and get a quality referral over to an investigator. “It puts the investigator in a position where they are on top of a claim; where they can be more proactive rather than reactive,” Cirino said.

“Automation is not one-size-fits-all,” said Sindy Houle, FRISS’s head of sales in Canada. “It’s not about automating necessarily the entire claim from end-to-end. Where that’s possible, it’s fantastic,” she said, “but sometimes it’s pieces.

“What checks and balances, what control mechanisms, can we implement to make sure we close the door to fraud as much as possible? How do we detect these anomalies up-front in the process, at [the] underwriting [stage] where possible, to shut that door on the bad actors so we don’t go through the claims process?”