It’s a common misconception that “everything is completely gone” if you’re in the path of a destructive wildfire, said Michael Young, vice president of model product management with Risk Management Solutions Inc. (RMS).

“One of the interesting facts that most people don’t recognize is that when you look at the burn footprints or the scarring footprints that are reported in various government datasets, most people assume that within that footprint, everything is gone,” Young said during a CatIQ Connect webinar Dec. 2. “But in actual fact, 30 to 60 per cent of structures that are in a given burn footprint do survive.”

For insurers, that could translate into a 30-60% loss reduction on buildings that are constructed in a way to reduce fire damage.

Young said the misconception about burn structures not surviving is sometimes the result of media coverage, where media will go “into the most affected area, and that’ll be the dominant perspective.

“So one of the tricks we have to figure out is, why did those ones survive?” Young said. “Is that just random luck, or is there something about the actual structure characteristics that are skewing them towards survivability and higher survivability?” 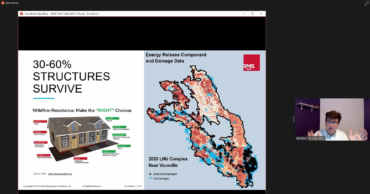 Protective measures can be put in place to protect individual homes. “We’ve known about some of these for over 30 years. The building codes often reflect these things in terms of, [for example], Class A fire roofs – highly-resistant fire roofs,” Young said during the session, Fire, Flood, and Earthquake: Latest Developments.

Other measures can be taken to better protect homes, such as closing eaves, having fibre cement board siding, dual-pane tempered screens on windows, rock mulch, and increased joist space and bitumen on joists of a deck.

“What we’ve done is we’ve built into our model the ability to classify individual buildings according to their characteristics… so that insurers can actually determine whether a structure is more likely or less likely to survive a wildfire,” Young said. “When you do this properly, we can actually show through our modelling that you can get a 30 to 60 per cent loss reduction associated with that, which is a very important thing to actually build into the insurance policy so that you do promote the right types of construction and preparation behavior in the public.”

Young also told Canadian Underwriter in an interview in May of this year that the survivability of structures inside many major fires in Canada and the United States is 30-60%. “So, there is a way to manage your risk level,” he said. “It’s not a fatalistic peril that you just have to resign yourself to.”

Traditionally, fire communities have focused on vegetation management, thinning out trees and such, “all very important aspects,” Young said during the interview. “But it also meant they’re not paying attention to the five-feet zone around individual buildings – if you get rid of mulch, remove flammable materials, use the right roof covering, those are things that can actually reduce the risk factor even when a wildfire does encroach on a particular neighbourhood.”

Feature image: Damaged structures are seen in Lytton, B.C., on Friday, July 9, 2021, after a wildfire destroyed most of the village on June 30. THE CANADIAN PRESS/Darryl Dyck