Smoke from the blaze, above Skaha Lake near Penticton, was first spotted Tuesday afternoon and by midnight about 10 square kilometres of bush had been charred.

The Regional District of Okanagan-Similkameen ordered the evacuation of 319 properties in the path of the fire.

Evacuation alerts were also issued for about 3,700 other homes near the fire, including on the southeast side of the city of Penticton.

The B.C. Wildfire Service says the blaze is burning in steep and rocky terrain and is uncontained. More firefighters and structure protection teams were being assigned to fight the blaze. 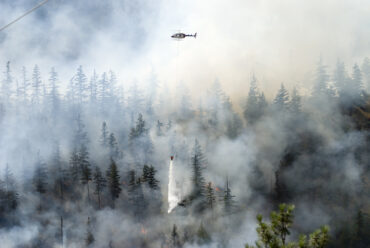 East of that fire, another 18-hectare wildfire is burning along Highway 33 between Beaverdell and Carmi and the Regional District of Kootenay Boundary has placed 44 properties on evacuation alert.

The wildfire service says that blaze was likely sparked by lightning and it has provided aerial and heavy equipment support to the local fire department.

A cause of the larger wildfire near Penticton has not yet been determined, the wildfire service said on its website.

More than 100 fires flared in the province over the last few days in the wake of lightning storms and a heat wave that raised the wildfire danger rating to high or extreme across most of southern and central B.C.

A large blaze in 1994 force 3,500 residents to flee and destroyed 18 homes, but a major emergency during a pandemic is something new.

Ron Obirek, the regional district director who represents the area, is one of those under an evacuation order.

He is staying with friends across Skaha Lake and said he woke Wednesday thinking the whole thing was a bad dream, until he looked outside.

“You can see your neighbour’s homes are being saved by that response.”

Obirek said even though the fire “cascaded” down the hillside toward homes, he believed none had been lost, although he knew the flames had come close.

He said there is added stress to the evacuation over the need to maintain protocols to prevent the spread of the COVID-19.

The regional district had set up a reception centre in Penticton for evacuees but said on its website that evacuees and those on alert should register online.

It would be a “polite understatement” to say the pandemic complicates the situation, Obirek said.

Visitors hoping for a “staycation” to get away from COVID-19 woes in other parts of B.C. had flocked to the region, he said, making it even busier than a normal summer.

“COVID hits us twice,” said Obirek, noting evacuees have few choices for accommodation because so many visitors are in town.

The heat was expected to continue for another day in Penticton with Environment Canada predicting temperatures in the low 30s, while showers are forecasts by Friday.

The city set a temperature record on Tuesday, breaking a 57-year record with a high of 37.5 C.