FREDERICTON – Hundreds of people remain out of their homes in New Brunswick months after historic floodwaters swept through the province, destroying buildings and inundating highways.

Bill Lawlor, director of the Canadian Red Cross in New Brunswick, said Tuesday that 120 people are still in emergency accommodations while others have made alternate living arrangements until they can move back home. 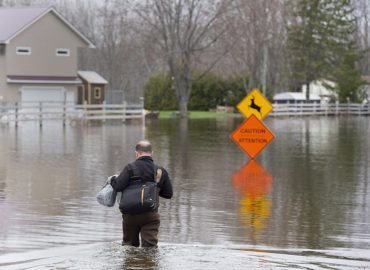 A resident heads home at Darlings Island, N.B. on Thursday, May 3, 2018 as the Kennebecasis River flooded the only road into the community. Swollen rivers across New Brunswick are still rising, flooding streets and properties and forcing people from their homes in several communities. THE CANADIAN PRESS/Andrew Vaughan

“We had well over 300 people at the height of the evacuation and it’s gone down to as low as 70,” he said. “The number has gone up and down, but it’s stabilizing now and we’ll continue to see it decrease.”

The province said about 12,000 properties were affected by widespread flooding between late April and mid-May, with dozens of homes and cottages beyond repair.

Lawlor said some residents only recently called the humanitarian organization, after weeks of staying with relatives, friends and neighbours.

“Some thought it was a short-term situation but eight weeks later they call us saying, ‘I can’t couch surf anymore, I have children,'” he said, explaining the fluctuation in the number of people seeking emergency accommodations.

Lawlor said others have moved out of hotels and university residences, but may not yet be in their homes.

“Some people are in their driveway, they’ve set up their recreational vehicle or trailer while their home is being repaired or they figure out what to do next,” he said. “Others remain with a host family, but they’re not under our care.”

He said some homeowners are having trouble finding tradespeople to do renovations during New Brunswick’s busy building and construction season.

“For those folks who have needed to be completely out of their home or have moved back but have significant renovations underway or are waiting for work to be done, it’s very stressful and draining,” Lawlor said.

Thousands of flood victims have registered with the Red Cross, which has extended its deadline until July 13. The organization has raised a record $1.16 million in response to the flooding.

The province has received 475 applications for disaster financial assistance and has not yet set a deadline on applications, he said.

“Buyouts are being examined,” Downey said. “Some people’s homes were essentially destroyed.”

Meanwhile, the province has also waived tipping fees in a bid to encourage homeowners to bring debris to the dump.

In all, 5,962 tonnes of waste has been brought to landfills, and the fees to dispose of non-hazardous, flood-damaged items will continue to be waived until July 28.

Property owners will be required to provide evidence of the damage in order to qualify for an adjustment for the 2018 taxation year, he said.