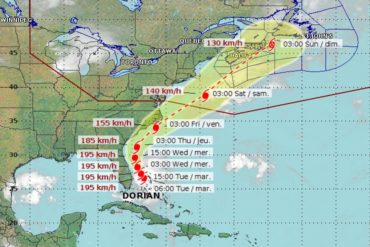 “When post-tropical storm Erin recently travelled through the Atlantic region, we didn’t see a significant spike in claims activity, largely due to the reduced severity and path of the storm when it traveled near heavily-populated areas,” said Greg Smith, chief client officer at Crawford & Company (Canada). “Hurricane Dorian is expected to arrive in the region later this week and we are watching its developments closely.

“[Dorian] is forecast to be a stronger storm than Erin. However, these storms are very dynamic and there is a great deal of uncertainty about its strength and path this many days out. We have our local teams preparing for a wide range of scenarios and have contingency plans already in place should we need to move additional resources into the region to respond. All of this is happening against the backdrop of us deploying Canadian adjusters to respond as part of Crawford’s international team in the Bahamas.”

Dorian’s current projected path has the storm first entering Canadian waters offshore late Saturday afternoon as a Category 1 hurricane (wind speeds of 74 to 95 mp/h). The path as of Tuesday would have the storm skirting Nova Scotia’s southeastern seaboard, ultimately heading directly towards Newfoundland as a post-tropical storm as of Sunday.

On a map of Dorian’s path posted by the Canadian Hurricane Centre, it’s unclear exactly when the hurricane would downgrade to a post-tropical storm.

“Damaging winds and torrential downpours will be the primary threats in Atlantic Canada,” Tyler Hamilton, a meteorologist for The Weather Network, reported in an online post Tuesday. “By Thursday, Hurricane Dorian is forecast to accelerate towards the northeast, due to the steering influence of a Bermuda high.

“A trough diving into Ontario on Friday has the potential to capture Dorian and pull the storm further east towards the Maritimes. If the timing of the trough changes and it misses any interaction with Hurricane Dorian, the system has a higher chance to impact Newfoundland and just brush by the Maritimes with little impact.”

Slow-moving and stalling storms such as Dorian are very difficult to predict, Hamilton writes. He suggested it would be easier to provide more specifics on Thursday, when the hurricane is expected to pick up its forward motion.

Last week, post-tropical storm Erin drenched some areas of southwestern Nova Scotia with as many as 162 mm of water last week. There have been media reports of flooding, although it is unknown as of press time the extent of the damage.

Bob Robichaud, warning preparedness meteorologist with Environment Canada, said some communities in southwestern Nova Scotia received up to 30 mm of rain per hour, which he described as an extreme rainfall rate.