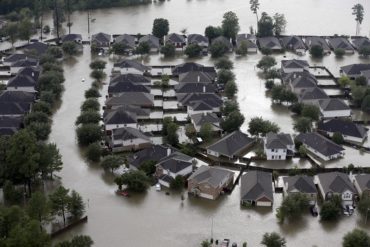 FILE – In this Tuesday, Aug. 29, 2017, file photo, Homes are surrounded by floodwaters from Tropical Storm Harvey in Spring, Texas. Doing an inventory of all of your possessions while your home is safe and sound makes it easier to file an insurance claim after a disaster such as Hurricane Harvey. (AP Photo/David J. Phillip, File)

On Monday, Aon Benfield, the global reinsurance intermediary and capital advisor of Aon plc, released the September edition of its Reinsurance Market Outlook report, which assesses the key drivers of reinsurance supply and demand in the approach to Jan. 1 renewals.

The report found that a “significant proportion” of the “unprecedented” flood losses generated by Hurricane Harvey in Texas and Louisiana will be uninsured, again highlighting the existence of a global protection gap, Aon Benfield said in a press release. Protection gap refers to the difference between insured losses and economic losses.

As a result of this gap, Aon Benfield continued, those affected will require substantial financial support from the United States government. Earlier this month, Risk Management Solutions, Inc. (RMS) estimated that National Flood Insurance Program losses from the hurricane, which came ashore in Texas on Aug. 25, will be between US$7-10 billion. On Sept. 6, AIR Worldwide estimated property losses from flooding in Texas caused by Harvey’s rainfall would be between US$65-75 billion.

Aon Benfield said in the release that the United States is one of the most insured countries in the world and yet, in 2016, almost 50% of the economic losses sustained from natural disasters remained unprotected, according to data compiled for the firm’s most recent Annual Global Climate and Catastrophe Report. “Much of the rest of the world remains chronically underinsured, at a time when the frequency of severe weather events is increasing,” the release added.

Meanwhile, the first half of 2017 saw a renewed surge of capital into the reinsurance sector, raising the total capital available to a record level of US$605 billion at June 30, 2017, an increase of 2% relative to the end of 2016, the Reinsurance Market Outlook report noted. Traditional capital rose marginally to US$516 billion over the six months to June 30, solid earnings being offset by the payment of final dividends. Alternative capital rose by 10% to US$89 billion, reflecting renewed investor appetite for insurance risk.

Eric Andersen, chief executive officer of Aon Benfield, reiterated that many of the Harvey losses are uninsured, “leaving the United States government, and therefore taxpayers, to pick up most of the bill. At the same time, we have an ‘over-capitalized’ reinsurance industry and new investors actively seeking access to diversified insurance risk. The frequency of severe weather-related losses is increasing and there needs to be a significant step-up in the efforts made to address the protection gap evident globally.”

The Reinsurance Market Outlook report reveals that major reinsurers continued to produce solid results in the first half of 2017, driven by a relatively benign loss environment and stabilized investment returns. It also highlights the competitive impact of a surge in alternative capital at the mid-year renewals.

Based on preliminary figures, and prior to the impact of Harvey, insured losses for the first eight months of 2017 totaled US$24.5bn, representing 56% of the 10-year average for the period. The reinsured component of these losses was low, given that a high proportion (nearly 90%) related to localized severe weather events in the United States.

More News
Related
CoreLogic estimates insured flood loss for homes affected by Hurricane Harvey at US$6.5 billion to US$9.5 billion
Total economic losses from nat, man-made disasters in 2016 at least US$158 billion: Swiss Re sigma estimate
Hurricane Harvey likely to be one of the costliest natural disasters on record for U.S. economy: Aon Benfield
U.S. P&C association calls on Congress to pass National Flood Insurance Program extension in wake of Hurricane Harvey