Hurricane Matthew, which became the first Category 5 Atlantic hurricane since Felix in 2007, clocked the top wind speed for 2016 at an estimated 101 miles per hour (about 162.5 kilometres per hour) on Oct. 6, according to CoreLogic’s Windy City Index, released on Monday. 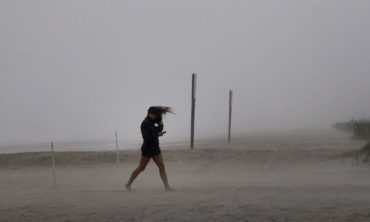 A woman fights the wind in Wrightsville Beach, N.C., Saturday, Oct. 8, 2016 as Hurricane Matthew moves up the east coast. Gov. Pat McCrory is warning North Carolina residents that even though Hurricane Matthew’s winds have been downgraded, the storm is still a danger because of flooding and storm surge. (AP Photo/Gerry Broome)

The index, an annual analysis of top wind-related natural hazard events, had peak winds of 85 mph and above in multiple cities in the United States, CoreLogic noted in a press release. The highest estimated wind speed of 101 mph during Hurricane Matthew occurred at Kennedy Space Center, FL. An additional 171 cities had estimated winds ranging from 75 mph to 85 mph – considered “significantly high” by the National Weather Service – as a result of the storm, CoreLogic said in the release.

While Hurricane Matthew claimed the top wind speeds in multiple cities, many of which are smaller and not typically included in the Windy City Index ranking, an analysis of the nation’s largest metropolitan areas shows that Nashville, TN ranks first as the windiest city overall, with 21 wind-related events and a maximum wind speed of 72 mph. The ranking among the nation’s largest 279 metros incorporates both the number of wind events, measured at the city centre plus a 10-mile radius, as well as the total force caused by any severe wind gusts of 60 mph or more. After Nashville, the top windy cities for 2016 are Reno, NV, Jackson, MS, Cincinnati, OH and Columbia, SC, the release said. 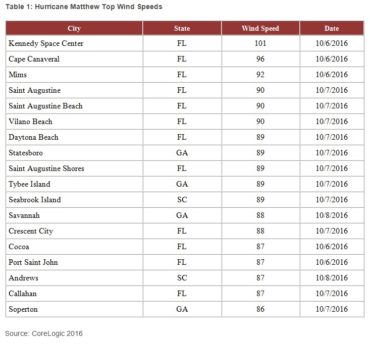 When looking only at wind speeds for the largest metros, Tallahassee, FL had the highest wind speed at 92 mph on Sept. 1, 2016. Analysis of the number of wind events for the year shows that Nashville and Jackson tied for the most wind events at 21, followed by Columbia at 18, Cambridge, MA at 17 and Cincinnati at 16.

“Wind can cause significant damage whether associated with an actual hurricane or not,” said Curtis McDonald, product manager at CoreLogic, in the release. “Wind speeds of 92 mph, even without a hurricane – as seen in Tallahassee – can be a significant threat to life and property. Hurricane Matthew’s high winds will result in insurance claims related specifically to wind events, and with insurance industry estimates putting wind damage at 25 per cent of all insurance claims each year, that percentage will likely be higher in 2016 due to Matthew.”

The CoreLogic Windy City Index uses proprietary forensic wind verification technology to evaluate wind events and maximum wind gusts occurring at the ground level across the United States in cities with populations of 100,000 or more. Unlike traditional wind records which rely on airport-based and private weather observation stations that record data at only one location, CoreLogic wind verification technology provides wind analysis at the property-specific level, the release explained. The data is localized and geographically specific so that even cities that are very close together can be measured independently.