The U.S. Defense Department was working around the clock to deliver humanitarian assistance to Puerto Rico and the U.S. Virgin Islands, even as the death toll climbed further across the Caribbean after Hurricane Maria. 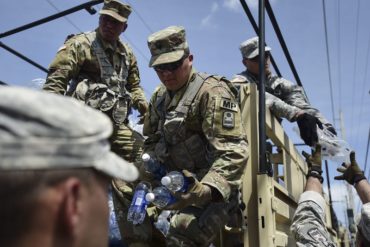 National Guardsmen arrive at Barrio Obrero in Santurce to distribute water and food among those affected by the passage of Hurricane Maria, in San Juan, Puerto Rico, Sunday, Sept. 24, 2017. Federal aid is racing to stem a growing humanitarian crisis in towns left without fresh water, fuel, electricity or phone service by the hurricane. (AP Photo/Carlos Giusti)

By Monday afternoon, the confirmed toll from Maria’s rampage across the Caribbean had jumped to at least 49 deaths, including 16 dead in Puerto Rico and 27 on the hard-hit island of Dominica.

Hurricane Maria slammed into Puerto Rico as a major Category 4 storm last week, ripping away rooftops, flooding streets and blacking out virtually that entire U.S. territory of 3 million people. Electricity had still not been restored by Monday, and officials who oversee the already poorly functioning power grid have said it could be weeks or months until power is fully restored.

The U.S. military also is helping in Puerto Rico by providing generators and the fuel to run them, Manning said. Eight Army UH-60 helicopters from Fort Campbell, Kentucky, are being flown to San Juan international airport to increase the capacity for distributing relief supplies. And the Navy ship USS Kearsarge ferried Marine and Navy teams into the Roosevelt Roads area of Puerto Rico to clear main roads and the airfield to bolster air support to the overall relief effort, said Pentagon spokesman Col. Rob Manning.

In San Juan, Puerto Rico Gov. Ricardo Rossello appeared at a brief news conference Monday and praised the U.S. federal response to Hurricane Maria, which has included sending nearly 10,000 people to help recovery from the devastation. He also said his government has been in touch with mayors across the island and was working to get food and water to isolated communities cut off after the hurricane.

Rossello said federal agencies also have helped restore power to a medical centre in San Juan and supply diesel to fuel the generators of hospitals as well as deliver food and water to hard-hit communities across the island. And the governor said he was “very grateful” to President Donald Trump for responding Puerto Rico’s petition for help.

Rossello appeared with Homeland Security adviser Tom Bossert and Brock Long, administrator of the Federal Emergency Management Agency, adding the presence of those two top officials was “a clear indication that the administration is committed with Puerto Rico’s recovery process.” Neither the FEMA administrator nor Bossert took questions from reporters. “We’ve got a lot of work to do. We realize that,” Long said.

In other developments, the confirmed death toll rose to 27 on the small island of Dominica, up from 15 deaths previously. Authorities said 27 others are still missing there after Maria smashed into the island Sept. 18 as a Category 5 hurricane before taking aim at Puerto Rico. Puerto Rican authorities said the death toll there has risen to 16, up from 10 previously.

Security forces in Dominica also said they have now controlled looting that plagued the hurricane-battered island in recent days. The island has been under a 4 p.m. to 8 a.m. curfew since Maria hit, causing severe damage. Police say they have arrested 120 people, most for violating the curfew.

On Monday afternoon, Maria’s large core was moving north over the Atlantic hundreds of miles (kilometres) south-southeast of Cape Hatteras, North Carolina. The U.S. National Hurricane Center said Maria was expected to move well east of the U.S. coast over the coming days, generating large ocean swells and rough surf along much of the Eastern seaboard. It was expected to become a tropical storm Tuesday night.

In Washington, House Speaker Paul Ryan has pledged that federal authorities will ensure that the people of Puerto Rico “have what they need.” Lawmakers approved $15 billion in hurricane relief after Hurricane Harvey caused massive destruction in Texas.