Is the number of Canadian hurricanes getting larger, or are we just better at detecting them?

Bob Robichaud, warning preparedness meteorologist with the Canadian Hurricane Centre (CHC), raised the question during a webinar on the Institute for Catastrophic Loss Reduction (ICLR)’s 2018 annual hurricane season forecast. He was responding to a question by ICLR research coordinator Sophie Guilbault, who asked if “we are experiencing more of these [severe] storms than before.” 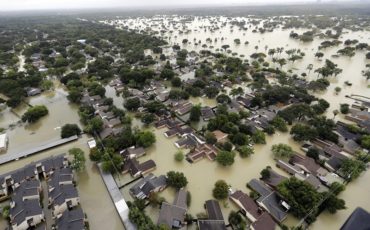 FILE – In this Aug. 29, 2017, file photo, water from Addicks Reservoir flows into neighborhoods as floodwaters from Tropical Storm Harvey rise in Houston. A new report on the damage caused by Hurricane Harvey says the U.S. has never experienced the amount of rainfall across such a vast area as that brought by Harvey when it struck Texas. The report released this week by the Harris County Flood Control District says more rain fell over a five-day period, and on such a broad area, than at any time since records have been kept. (AP Photo/David J. Phillip, File)

“It is more difficult to differentiate between, ‘Are we getting more storms, or are we just getting better at detecting them?’” Robichaud replied. He observed that tools to detect hurricanes are “almost not comparable” to what was in place 10 years ago, “so the fact that we are detecting more storms doesn’t mean there are actually more storms out there.”

“Are we going to get better predictions?” he asked. “At some point, we are going to reach a certain limit. We are never going to be able to predict these tracks 100%. We are certainly getting better every year. Sometimes we get a lot better; sometimes the difference is very small, but it’s continually improving.”

This season, the number of hurricanes will likely be “near average to slightly above average,” said Robichaud.

Robichaud noted that for Canada, based on a 30-year average, between 30-40% of the named storms that form in the Atlantic enter the CHC’s response zone, although most don’t have significant impacts in the country. Last year, three entered the response zone.

“Very often, when the storms reach Canada, we have a very distinct pattern, with the heaviest rain on the left hand side of the storm…while the strongest winds are on the right hand side,” Robichaud said during the webinar, adding that the worst storm surge often comes from the right side as well.

In 2017, Hurricane Harvey produced preliminary damage costs of US$125 billion and a record-setting rainfall amount of 1,539 millimetres of rainfall over a five-day period. Radar estimates from swampy areas, in which there are no rain gauges, estimated rainfall of between 1,600-1,800 mm. By comparison, that amount of rainfall is more than double the annual rainfall in Toronto, and more than Toronto’s annual rainfall and from the 2013 Calgary and Toronto floods combined.

The 2017 season also saw Hurricane Irma (US$50 billion in damages) and Hurricane Maria (US$90 billion in damages). “They’re still very much in the recovery phase today,” Robichaud observed. “As somebody from [the Federal Emergency Management Agency] mentioned to me down in the U.S. earlier this spring, they’re just a mid-level tropical storm away from bringing them right back to the day after Maria. Their recovery is extremely fragile even today.”

So why did the 2017 season turn out worse than predicted?

“The main reason why the season was busier was because of an over-prediction of El Niño, which never really materialized,” Robichaud said.

El Niño affects wind shear. Strong wind shear makes it harder for hurricanes to form. Wind shear is one of three things forecasters look at to determine what the season will look like (this year’s wind shear is about normal). The other factors are water temperature (this year’s temperature is not quite as warm as last year, although it may be closer to normal by August) and a 20-40 period of time called the multi-decadal cycle, in which Atlantic water temperature is colder or warmer for extended periods of time.

“We have been in a warmer, or more active hurricane period for a while now – since 1995,” Robichaud said. “We’re assuming we’re still in an active phase, which would favour a bit more hurricanes than the average.”