REGINA – Husky Energy is going to see how much more oil – if any – can be cleaned up from a major spill last July along the North Saskatchewan River. 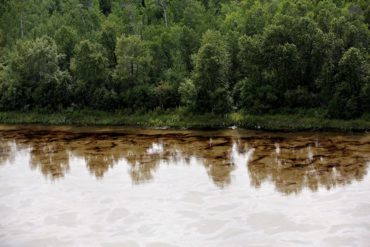 The company has started more shoreline cleanup and assessment of the leak, which spilled 225,000 litres of heavy oil mixed with diluent onto the bank of the river near Maidstone, Sask., last July. About 40 per cent reached the river and the oil plume flowed hundreds of kilometres downstream.

About 93 per cent of the oil was cleaned up last year.

Wes Kotyk, an assistant deputy minister with the Ministry of Environment, says the intent is to find areas that were missed, possibly because of high water levels.

Kotyk says one spot has already been identified 18.5 kilometres from the source of the spill.

“That’s one area where some oil has been observed and so they will be going to clean that up and they will be looking for any others,” Kotyk said Monday.

He said Husky’s (TSX:HSE) cleanup work will involve 55 people, some on boats, as well as dog handlers moving up and down the shoreline to find possible cleanup spots.

How any remaining oil is dealt with will depend on whether it’s found along the shoreline or at the bottom of the river, he said.

“Anything that is recoverable will be,” Kotyk said.

“A monitoring plan is being developed and sampling to determine if there is any submerged or sunken oil and, if there is, then they would have to come up with a plan for how to deal with that.”

He could not say how long the cleanup will take, but added that Husky could be onsite the rest of the year if necessary.

“It’s hard to say if what’s remaining is going to be done within a month or two months. It’s a matter of they need to do the investigation and find out what’s there first, and then they can determine what time frame that it would take to do that additional cleanup.”

The spill forced the cities of North Battleford, Prince Albert and Melfort to shut their intakes from the river and find other water sources for almost two months.

Environmentalists have called for Husky to be fined for discharging a substance that could hurt the environment.

Saskatchewan’s Justice Ministry is reviewing Husky Energy’s response to alarms before the spill to determine whether charges are warranted.

Government investigators say the leak began July 20, the day before the spill was discovered. Investigators found that the pipeline’s alarms were warning of potential problems and continued until the line was shut down for scheduled maintenance at 7:15 a.m. on July 21.

Husky Energy said last summer that pipeline monitoring indicated pressure anomalies at 8 p.m. on July 20 and the company started a shutdown at 6 a.m.

The company, which has spent more than $107 million on the cleanup, said the pipeline buckled because of ground movement.

Husky has said it accepts full responsibility and is using what it learned to improve systems and operating procedures.