Investments in flood mitigation will help make Toronto’s under-used Port Lands safer for mixed-use development, Insurance Bureau of Canada suggested Thursday in reaction to a June 28 announcement that the federal and provincial governments will contribute $1.185-billion towards a project that is intended to, among other things, raise the grade in the area by an average of two metres. 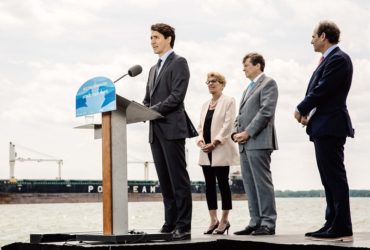 The federal and Ontario governments announced Wednesday they plan to contribute up to $384 million and more than $400 million respectively to Waterfront Toronto, some of which will be used for flood mitigation. That is on top of $65 million in previously-announced funding.

“Currently, 290 hectares of urban land east and south of the Don River are subject to risk of flooding,” the Toronto and Region Conservation Authority states in a backgrounder.

Waterfront Toronto is a corporation, overseen by all three levels of government, that has a mandate to convert about 2,000 acres of brownfield land – including the port lands – along the shore of Lake Ontario for redevelopment.

About 715 acres southeast of downtown Toronto “are at risk of flooding from the Don River watershed and cannot be revitalized under they are flood protected,” Waterfront Toronto stated in a backgrounder.

The port lands is an area that juts into Lake Ontario, near the mouth of the Don River, southeast of downtown Toronto. It was created more than a century ago by infilling a wetlands area. Home at one time to the Hearn electrical power plant, properties on the port lands now include Pinewood studios and the Rebel nightclub, among others.

That area “sits within the Don River’s floodplain, which is defined as the area anticipated to experience flooding in the event of a significant regional storm or 100-year flood,” Waterfront Toronto stated in a backgrounder. “An estimated 18,000-25,000 people will live in the Port Lands, after it is fully developed.”

The Port Lands Flood Protection project “includes a flood protection landform completed in 2012 to protect 210 hectares (519 acres) in the West Don Lands neighbourhood and eastern downtown Toronto,” the city states in a backgrounder.

“The project will create a new river valley through the Port Lands that allows for the natural flow of water from the Don River to Lake Ontario, involves the excavation, remediation and placement of contaminated post-industrial soil, and raises the grade in most of the area by an average of two metres,” according to the backgrounder.

Funding for the separate $65-million Cherry Street Storm Water and Lakefilling project was announced Sept. 14, 2016. With the June 28, 2017 announcement, this brings the total shared funding for port lands flood protection to $1.25 billion.

“The Toronto Port Lands development will transform an industrial site into an attractive residential community,” stated Craig Stewart, vice president of federal affairs for IBC stated in a June 29 release. “Recognizing that this is a floodplain, the federal government, the Government of Ontario and the City of Toronto are investing the needed funds to ensure this new community is inoculated against flood risk.”

The project will include “installation of new municipal infrastructure, including water mains, wastewater and storm water sewers,” the city said in a backgrounder. “It will also involve the creation of roads and a transit right-of-way, and the relocation of hydro utilities.”

The funding “will help protect Toronto’s Port Lands from flooding and lay the groundwork to transform the underused industrial area into a vibrant and resilient downtown neighbourhood,” the city, federal and Ontario governments said in a joint press release.

“As more development in the area is anticipated, investments in flood mitigation will help make this community safer for residents and stronger for economic growth,” IBC said Thursday.