As British Columbia has declared a state of emergency due to wildfires burning out of control throughout much of the Interior, the Insurance Bureau of Canada (IBC) is encouraging policyholders to discuss policy limits with their insurer. 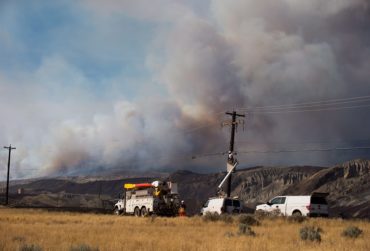 Workers repair power and telecommunication lines damaged by wildfire as a fire burns on a mountain near Ashcroft, B.C., on Sunday, July 9, 2017. B.C. government officials now estimate that 7,000 people have been evacuated from their homes due to wildfires burning in the province. THE CANADIAN PRESS/Darryl Dyck

Most home and business insurance policies cover fire damage. If residents have to leave their homes because of a mandatory evacuation order issued by civil authorities, most homeowner’s and tenant’s insurance policies will provide coverage for “reasonable additional living expenses (ALE) for a specified period of time,” IBC said a press release on Saturday.

Steve Kee, director of media & digital communications with IBC, told Canadian Underwriter that “each person’s situation will be unique,” but there are several broad categories of claims that fall under ALE and some that may not. For example, some policyholders will have coverage for alternative living expenses as well as repairs to their homes and replacement of their contents, or their policy may stipulate an overall total for these coverages. Kee also encouraged policyholders to check whether or not they have coverage for secondary/seasonal properties.

Overall, Kee said, IBC’s tracking of cat events has shown an increase in recent years and, “in fact, a record in 2016. We know that flood risk is rising across the country as a result of climate change and events this year alone show why it’s so important for governments, our industry and consumers to work together to protect Canadians. As for fire, this too is a problem… linked to the climate,” he suggested.

While it is difficult to measure the effectiveness of educational initiatives from the insurance industry, Kee said that IBC has “seen a major focus on disaster events across Canada in the last couple of years,” including fire, floods and earthquakes. IBC has also conducted tours this summer about the impact of extreme weather in Alberta, and in B.C., much of the focus has been on earthquake awareness and preparedness.

Following the 2003 Okanagan Mountain Provincial Park wildfire in Kelowna, B.C., the Institute for Catastrophic Loss Reduction (ICLR) sponsored a study on the extent that FireSmart principles were adopted by homeowners in Kelowna and Slave Lake following fires, Kee told Canadian Underwriter. FireSmart is a national program that helps Canadians reduce their wildfire risk and become fire-adapted through community-based solutions.

On Friday, Todd Stone, B.C.’s Minister of Transportation and Infrastructure and Minister responsible for Emergency Management BC, announced in a statement a provincial state of emergency to ensure a “coordinated response to the current wildfire situation and to ensure public safety.”

On Friday alone, 56 new wildfires began throughout the province. Evacuation alerts and orders were issued for Ashcroft, Cache Creek and Princeton, in addition to evacuation orders and alerts issued for 105 Mile House and 108 Mile House, Stone said in the statement.

The Canadian Press reported on Monday that there were “more than 200 intense wildfires raging across British Columbia,” as 300 firefighters and support staff from Alberta, Saskatchewan, Ontario and Nova Scotia were expected to start arriving in the province to help relieve the pressure on the roughly 1,000 B.C. firefighters battling the blazes.

The Canadian Press said that about 8,800 people have had to flee their homes, primarily in the province’s central and southern Interior regions. The entire district of 100 Mile House, a community of roughly 1,800 people, was ordered evacuated Sunday night.