As part of an earthquake preparedness campaign, the Insurance Bureau of Canada (IBC) is touring Quebec and will be inviting residents of participating cities to experience a unique sensation inside the ‘Quake Cottage,’ a mobile earthquake simulator. 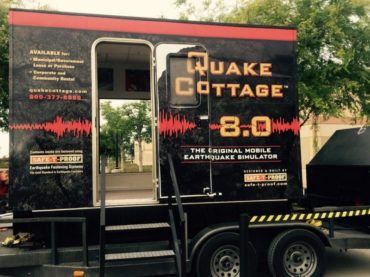 The ‘Quake Cottage’ will travel through Quebec beginning Oct. 6 to give residents a unique chance to experience what an earthquake feels like. Photo: @Alisabecerra.

Starting Oct. 6, the Quake Cottage will travel through the province to give Quebecers a unique chance to experience what an earthquake feels like, IBC said in a press release issued on Tuesday. The tour – which will take place around the time of the Great ShakeOut, an international earthquake preparedness event – is aimed at making residents aware of this “often ignored risk,” IBC said.

Eastern Canada experiences some 450 quakes each year, “and there is a real possibility that a major quake will hit Quebec one of these days,” IBC noted.

The simulator will allow each person experience a 30-second quake measuring 8.0 on the Richter scale. “Even a magnitude 7 quake in Quebec could see lives lost and cost tens of billions of dollars in damage,” said Pierre Babinsky, director of communications and public affairs at IBC, in the release. “Using this experience, we would like to explain to citizens that they may go through such an event in the next 50 years and that they must learn to protect themselves.”

Several Quebec regions are at risk of a major quake, so IBC is touring the province with the simulator from Oct. 6 to 15 to make “as many people as possible” aware of this possibility. The tour dates include Baie-Saint-Paul on Oct. 6; Montreal on Oct. 10 and 11; Trois-Rivières on Oct. 12; Sherbrooke on Oct. 13 and Quebec City on Oct. 14 and 15.

“This tour is a first in Quebec and we’re pleased to see that several cities are making earthquake risk awareness a priority,” Babinsky said.

Earlier this year, IBC teamed up with the government of British Columbia, 34 municipalities and local universities to remind British Columbians of the importance of earthquake preparedness. The IBC ShakeZone Tour, which featured the Quake Cottage, made 34 stops throughout Vancouver, Vancouver Island and the Sunshine Coast in late April and May to provide a “unique opportunity for residents to experience an earthquake in a safe and informative environment,” IBC said in April.