The Insurance Bureau of Canada (IBC) has teamed up with the government of British Columbia, 34 municipalities and local universities to remind British Columbians of the importance of earthquake preparedness. 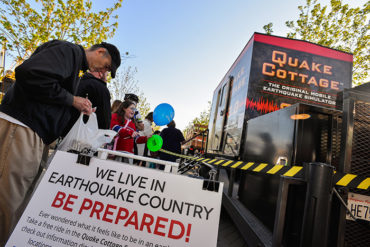 The IBC ShakeZone tour will make 34 stops throughout Vancouver, Vancouver Island and the Sunshine Coast to provide a unique opportunity for residents to experience an earthquake “in a safe and informative environment,” IBC said in a press release on Friday.

The ShakeZone tour uses the “Quake Cottage,” a portable earthquake simulator that first visited British Columbia last year. Visitors to the ShakeZone will experience what a magnitude 8.0 earthquake feels like. They will also learn steps they can take in their home to help make sure their families are safe, such as equipping the home with an emergency preparedness kit, IBC said. 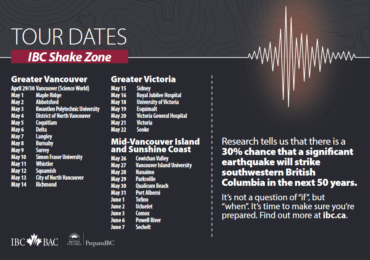 “More than 3,000 earthquakes occur in B.C. every year and experts predict that there is a 30% chance that a major earthquake will strike at some point over the next 50 years,” said Bill Adams, vice president, Western & Pacific, with IBC. “The ShakeZone aims to give British Columbians an interesting experience while promoting the need to know the risk and be prepared.”

Despite the relatively high likelihood of an earthquake in the next 50 years, a recent Pollara poll showed that residents of British Columbia don’t think an earthquake is likely to hit their area during that time. In 2013, IBC also commissioned a report that showed Canadians simply aren’t prepared for an earthquake.

“The ShakeZone will help educate British Columbians about the risk of an earthquake while providing a little entertainment at the same time,” Adams said.

The tour runs from April 29 to June 7. For more information, visit http://www.ibc.ca/bc/disaster/earthquake/shakezone.