The Insurance Corporation of British Columbia (ICBC) announced on Thursday that it will submit its 2016 basic rate application to the British Columbia Utilities Commission, asking for a 4.9% increase to basic insurance rates – lower than last year’s 5.5% increase.

If approved, this will mean an average increase of $3.50 per month for personal customers’ basic insurance coverage, ICBC explained in a press release. 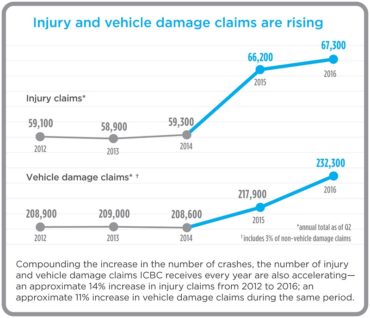 “The external pressures on insurance rates in B.C. are very real and they’re accelerating, including an escalation in the number of crashes, the number of claims being filed and the cost of settling those claims,” ICBC said in the release.

Other “external pressures” include:

“We certainly don’t like to have to ask our customers to pay more but these external pressures are very real and they have created a perfect storm which we are struggling to hold off,” said Mark Blucher, ICBC’s president and CEO, in the release. “We’ve worked hard to get this rate increase lower than last year’s but the amount of basic premiums we collect will still not cover the increasing amount we’re paying out in basic claims costs.” 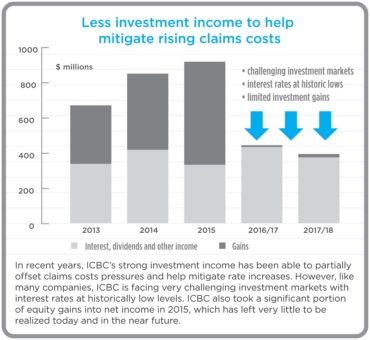 To cover the costs of more crashes and more claims, ICBC would need to charge every customer approximately an extra $130 a year, the release said, which would have required a rate increase of 15.5%. Instead, in partnership with the provincial government, the corporation has implemented various initiatives aimed at alleviating the escalating pressures on auto insurance rates in the province, including:

Blucher added in the release that ICBC is also looking at how other jurisdictions are dealing with some of the same challenges. 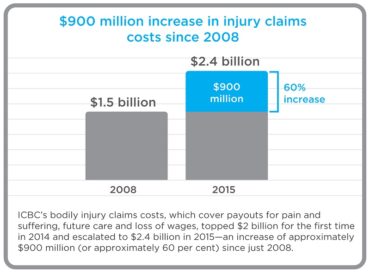 “The reality is that ICBC continues to face mounting costs as a result of the frequency, complexity, and severity of bodily injury claims, in addition to higher vehicle repair costs,” Stone said in the statement. “The actual cost of these pressures would have required a rate increase of 15.5%. However, government and ICBC have taken a number of steps to protect families from the full cost impact of these pressures. We will continue to work with ICBC to identify and implement longer-term, sustainable measures that will ease the pressure for future rate increases.”