The Insurance Corporation of British Columbia (ICBC) has launched a pedestrian safety campaign with the provincial government and police to urge pedestrians and drivers to stay safe as “crashes involving pedestrians spike at this time of year.” 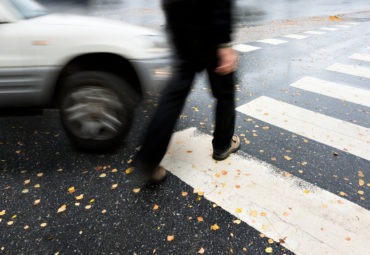 On average, 59 pedestrians are killed and 2,300 injured in crashes every year in B.C., with almost half of these fatalities (46%) occurring between October and January, ICBC said in a press release.

According to ICBC, about 70% of pedestrian crashes occur at intersections. However, since 1999, ICBC, the B.C. government and police have joined forces for the intersection safety camera program, which involves cameras being set up at 140 of the highest-risk intersections in 26 communities across the province.

For their part, ICBC said in the release, pedestrians can help stay safe by making eye contact, wearing bright and reflective clothing, and staying focused on the road. ICBC will be distributing reflectors and safety tips through community policing volunteers across the province in areas with high volumes of pedestrian traffic.

“Fall brings less daylight and weather changes, including rain and fog, which means visibility can be poor this time of year,” said Todd Stone, B.C.’s Minister of Transportation and Infrastructure, in the release. “Drivers need to be especially cautious at intersections and look out for pedestrians. As pedestrians, it’s critical we do what we can to be seen by drivers.”

Chief Constable Neil Dubord, chair of the B.C. Association of Chiefs of Police Traffic Safety Committee, noted that drivers involved in crashes with pedestrians are often distracted or fail to yield the right of way. “These behaviours are not only against the law, they’re simply unacceptable,” he said.

Be a safe pedestrian (ICBC)