Insurance-linked securities (ILS) investors are responding to the recent uptick in natural disasters by making payments to ceding companies, while at the same time continuing to raise more money and preparing to make new investments, Willis Towers Watson (WTW) Securities reported on Friday. 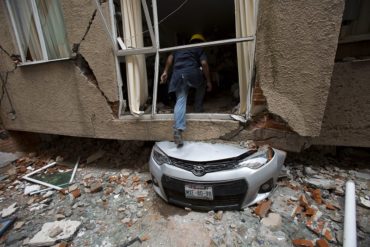 Rodrigo Diaz Mejia climbs over a crushed car into what was a second-story apartment felled by the earthquake at 517 Tokio street in the Portales Norte neighborhood of Mexico City, Wednesday, Oct. 18, 2017. The 38-year-old mechanic who lives nearby said he ran to help rescue people trapped atop the buildings roofs on the day of the quake, Sept. 19, and has since been making risky trips into the ruptured structures to retrieve valuable possessions for displaced residents. (AP Photo/Rebecca Blackwell)

Those were the main findings of the latest quarterly ILS market update from WTW Securities, the investment banking business of global advisory, broking and solutions company WTW.

“None of the tragic natural catastrophes in the third quarter – two Mexican earthquakes and three Atlantic hurricanes – was individually of the US$100 billion loss amount that might trigger a major shift in pricing,” WTW Securities said in a press release. “However, the aggregate losses from the quarter are likely to reach US$100 billion,” WTW Securities noted, “a magnitude that serves to remind the industry of the potential scale of losses it could face and providing an effective test of its capitalization, ability to recapitalize and the resilience of the investor base.”

The report suggested that 2017 may be the largest aggregate ILS payout to date. “A word of caution remains appropriate, as we are still early in loss development and 2017 is not even over, so more catastrophes might still occur,” the report said. “Thus far, as a whole, ILS investors and traditional reinsurers have performed well. The anticipated reduction in the length and severity of market hardening because of ILS will benefit policyholders who need stable and affordable protection.”

Bill Dubinsky, head of ILS at WTW Securities, added in the release that “even though this is not ‘that year’, the recent loss activity will provide some clues as to what might happen when it does occur, and we can say that so far ILS investors and traditional reinsurers have performed well, supporting insurers to serve their policyholders.” In particular, he pointed to the Mexican government’s FONDEN bond, where the Class A notes may see a total loss of principal, “delivering US$150 million of disaster relief where it is vitally needed.”

Overall, Q3 2017 saw US$460 million of non-life cat bond capacity issued through two cat bonds (Q3 201 saw US$925 million issued through two bonds), the report said. Sponsored by AMTrust, the first issuance of the quarter was Fortius Re II 2017-1, which provides US$100 million of fully collateralized protection over an approximately four-year risk period. The Section A Layer offers indemnity protection for the property portfolio, covering U.S. name storms and U.S. and Canada earthquakes on a per-occurrence basis. The second, which was sponsored by the government of Mexico, secured US$360 million of parametric cover.

John Seo, co-founder and managing director of Fermat Capital Management, LLC, a non-traditional fixed-income strategies company, was interviewed for the report. “For better or worse, after a significant loss event many current and potential ILS investors are conditioned to put additional or first-time capital into ILS. As a result, investor interest in ILS is higher now than ever before,” he said. “No doubt, this is due, in part, to an expectation that some reinsurers and insurers will firm up premiums for some programs in 2018 and that this might have a spill-over effect on the ILS market. I expect ILS to continue to play a role in moderating post-event rate increases.”

Willis Towers Watson Securities, with offices in New York, London, Hong Kong and Sydney, provides advice to companies involved in the insurance and reinsurance industry on a broad array of mergers and acquisition transactions as well as capital markets products. This includes acting as underwriter or agent for primary issuances, operating a secondary ILS trading desk and engaging in general capital markets and strategic advisory work.