After several days of favourable weather for firefighting in British Columbia, weather conditions are worsening in the Cariboo Fire Centre, bringing with it an expected increase in fire behavior and wildfire growth, the province’s Ministry of Forests, Lands and Natural Resource Operations suggested on Wednesday. 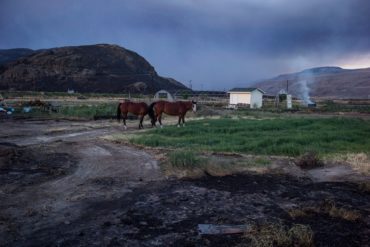 Horses that survived a wildfire stand outside a neighbouring home to feed after numerous homes were destroyed by fire on the Ashcroft First Nation, near Ashcroft, B.C., late Sunday July 9, 2017. Ranchers in the centre of British Columbia’s cattle country are facing “heartbreak” as they return to scorched fields, dead and displaced livestock and damaged infrastructure following weeks of wildfires. THE CANADIAN PRESS/Darryl Dyck

The ministry said in a press release that winds were anticipated to pick up beginning in the afternoon of July 26 and forecast to reach 25 kilometres per hour (km/h) from the southeast, with gusts up to 40km/h. Winds are expected to shift later in the day to 20 km/h, with gusts to 40km/h from the northwest and persisting until midnight.

There is also a chance of lightning throughout the Cariboo Fire Centre, which could start new wildfires. “Winds associated with lightning storms will be gusty and their direction will be unpredictable,” the release said. “Winds will pick up again tomorrow and the risk of lightning will continue through Thursday, July 27.”

The major wildfires burning in the Cariboo Fire Centre, with the exception of the Gustafsen fire, are classified as “out of control,” the ministry reported. According to the BC Wildfire Service, the fire west of 100 Mile House, which has been burning for nearly a month, is 5,700 hectares in size and is currently being held. The other out of control fires have large, uncontained areas and their perimeters will grow with the winds that are expected, the ministry suggested in the release, adding that “it is also possible that some containment lines may be breached if the winds are significant enough to push the fires into unburned fuel across these lines or create new spot fires outside of the main fire areas.

The warning from the forestry ministry came on the same day it said that “a return to warm and dry conditions has resulted in increased fire behavior in many parts of the Elephant Hill wildfire,” which is burning north of Ashcroft and Cache Creek and east of Clinton. As of 10:35 p.m. on Wednesday, the fire was an estimated 62,532 hectares in size and 30% contained. The ministry said in a statement on Wednesday that about 300 firefighting personnel are assigned to the fire, backed up by 60 pieces of heavy equipment, 50 structural protection specialists, 60 support staff and air support.

“On July 25, 2017, unexpected easterly winds pushed the fire over the western containment lines towards the Bonaparte River,” the statement said. “This shift prompted the Thompson-Nicola Regional District to expand evacuation orders for several properties northeast of Clinton, in the interest of safeguarding life and property.” There were no “immediate threats” to structures.

The Canadian Press reported on Thursday that the Thompson-Nicola Regional District has declared a local state of emergency and issued two evacuation orders covering about 60 properties near the fire.

An estimated 19,000 people across the province still remain out of their homes.

On the ground and in the air, the @CanadianForces is supporting BC as it fights the wildfires #OpLENTUS #BCWildFire https://t.co/XMrNdiyBxu pic.twitter.com/QjK2ZH691Y