Industry needs ‘to find a solution’ to this claims adjusting problem

Something needs to be done to make it easier to let Canadian claims adjusters work outside their home province in the event of a disaster, speakers suggested on a recent webinar.

“It’s generally understood that it’s easier to bring U.S. adjusters up to Canada than it is to bring adjuster across provincial boundaries in the country due to interprovincial trade barriers. We have been talking about ripping these down for many many years, and nothing really becomes of it,” said Glenn McGillivray, managing director of the Institute for Catastrophic Loss Reduction.

“All the provinces want to protect their economies. So they protect their home builders and their plumbers and their other trades and they want to make sure that other provinces aren’t moving in on their territory. That’s all well and good, Then when it hits the fan and they need help, they expect to get that help immediately and you can’t have it both ways. We really have to find a solution to this,” McGillivray said during Canadian Underwriter‘s Aug. 27 webinar, Standing on Guard for Thee: Adjusting Canadian NatCats.

Currently, each Canadian province and territory has its own licensing requirements for adjusters. 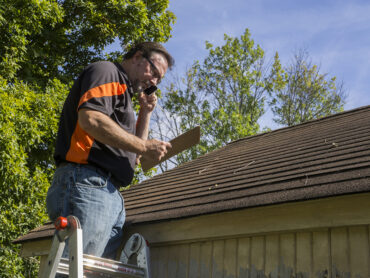 Claims professional “need to push” this with regulators, said Patti Kernaghan, president and chief executive officer of Kernaghan Adjusters, during the Canadian Claims Summit in August of 2018.

There is a general rule for Canadian firms wanting to hire temporary foreign workers, which outlines that the employer must get a labour market impact assessment showing that no Canadian worker is available for the job.

But the North American Free Trade Agreement (NAFTA) created an exception to this rule for dozens of professionals one of which is ‘disaster relief insurance claims adjuster.’ The Canada United States Mexico Agreement (CUSMA), which recently replaced NAFTA, has essentially the same rules in place allowing Canadian firms to temporarily employ American claims adjusters in Canada in the event of a disaster.

“It’s actually easier to bring an all lines adjuster up from the states to work in most provinces than it is to shift someone with an Ontario licence to work in Alberta or B.C. The industry shakes their head and has never quite understood why,” said Skip McHardy, chief operational officer of catastrophe response at CRU Group, during the recent Canadian Underwriter webinar.

“We look at ourselves as insurance professionals but we truly are first responders. And that ties into: People need us and they need us fast to help take care of them and make sure the service levels are kept up.”

McGillivray agreed that claims adjusters are essential first responders when webinar speakers were asked about what’s going on with mobility of adjusters in Canada.

Related: More than one way to define a Cat

“You wouldn’t think twice about bringing heavy urban rescue from Toronto over to Vancouver or something like that. Why would you make it difficult to get adjusters to where they are needed? Insurance claims money is liquidity. It’s what helps communities bounce back after a loss,” he said.

Fewer than half of the webinar audience members polled said they were either very confident or confident that the industry has enough capacity to handle catastrophes. Audience members were asked during the webinar how confident they are that the Canadian P&C industry has enough capacity to handle catastrophe claims in the future. The results were:

CRU Group did bring up U.S. adjusters in June for the hailstorm that affected the Calgary area. But McHardy suggested that has more to do with difficulties in finding adjusters in Canada with the attributes and skills needed for property catastrophes.

“He has to give 100% of his dedication to the particular carrier that he is going to work for, has to be able to do all the work, climb the roof, write an accurate estimate in either Symbility or Xactimate — the [software] platforms that the carriers need. And, oh, by the way, he doesn’t get paid until he does the work and he is not sure if he is going to be there three days, three weeks, three months or two years.”