OPTIS Partners has likened recent mergers and acquisitions (M&A) activity among U.S. and Canadian agencies selling p&c insurance and employee benefits to an explosion, with the 178 reported transactions in 2017 Q1 dwarfing the 115 deals in the prior-year quarter. 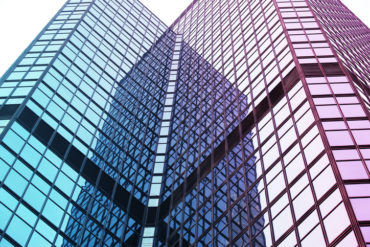 “The growth was impacted, in part, from the formation of Alera Group, a new private-equity backed firm that closed 24 separate deals on January 1, 2017,” notes the report, 2017 1st Quarter Agent /Broker Merger & Acquisition Update, which was released Wednesday.

“Notwithstanding this unique transaction, the number of Q1 transactions would still have out-paced any previous quarterly period,” states the report.

The report breaks down buyers into five groups: private-equity (PE) backed brokers, privately held brokers, publicly held brokers, banks and all others, notes a company statement announcing the availability of the report.

Of all M&A categories in the report, PE-backed buyers again led the charge, accounting for 93 transactions in the first three months of 2017 compared to 56 in the same quarter of 2016.

The next most popular categories of transactions were as follows:

“Insurance company activity also hit a quarterly high, with all but two of the transactions based in Canada,” the report states.

“There were a total of 15 Canadian transactions announced during the first quarter, the first time there were more than 10 Canadian deals in a quarter,” it points out.

Considering sellers by type, OPTIS Partners reports that p&c agencies made up 79 announced transactions for 2017 Q1, p&c/benefits brokers for 28, and sales of employee benefits agencies for 58 (up dramatically from 13 in the prior-year quarter).

“P&C firms continue to be the focus of acquisitions with their highest quarterly count ever,” the report points out, while sales of employee benefit (EB) firms “jumped during the quarter, principally due to most of the Alera Group sellers coming from the EB sector.”

Of the six large, notable transactions announced or closed during 2017 Q1 was Canada-based Western Financial Group sold to Wawanesa Mutual, and USI Insurance Services LLC’s private equity partner, Onex Corporation, announcing it would be selling its stake in USI to Kohlberg Kravis Roberts and Co. LP and Caisse de dépôt et placement du Québec in a transaction valued at more than $4 billion.

“By all measures, 2017 will likely be another banner year for M&A,” Timothy Cunningham, managing director of OPTIS Partners, predicts in a company statement.

“Buyers are still being very aggressive in their valuations of prospective acquisition partners,” Cunningham adds. 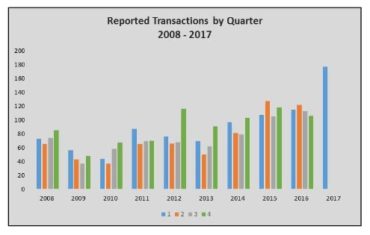 “Most indicators are positive or trending positive, notwithstanding some uncertainty,” including interest rates still being low, the economy continuing to improve and insurance pricing remaining relatively stable, the report states.

Daniel Menzer, partner with OPTIS Partners, notes the number of sales was undoubtedly greater than the 178 reported since many buyers and sellers do not announce transactions.

Buyers are still being very aggressive in their valuations of prospective acquisition partners, the report explains. Among other things, it states the following:

When more reasonable valuations and transaction activity occurs, however, both buyers and sellers will “need to adjust expectations and future plans accordingly.”