The Insurance Council of New Zealand (ICNZ) has upgraded the insured costs associated with Cyclones Debbie and Cook to NZ$109 million from the NZ$84.4 million estimate in June. 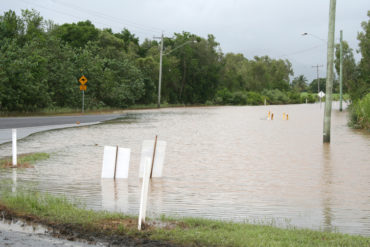 The two cyclones swept through New Zealand during April (Cyclone Debbie from April 3 to 7; Cyclone Cook from April 13 to 16), forcing the evacuation of residents of Edgecumbe, ICNZ said in a press release on Friday.

Provisional data released in June had 8,043 claims costing NZ$84.4 million. The final data has now upgraded claims to 9,186 and costs to NZ$108.7 million, making these events the most damaging since the lower North Island storm in February 2004, ICNZ said in the release. According to the New Zealand Historic Weather Events Catalog, the lower North Island storm brought high winds, heavy rain, flooding and slips to much of the North Island as well as the upper South Island. Thousands of people were evacuated and several died or were injured.

For Cyclones Debbie and Cook, the remnants hit Edgecumbe the hardest and resulted in 15% of the claims by number and 50% of the value of claims received nationally for these events, ICNZ reported in the release.

“This brings the total to date for significant weather events for 2017 to NZ$199 million which means this year already is the most damaging year since the Wahine storm of 1968 and we are well on the way to 2017 being the most expensive year for weather events since our records began,” said ICNZ chief executive Tim Grafton. 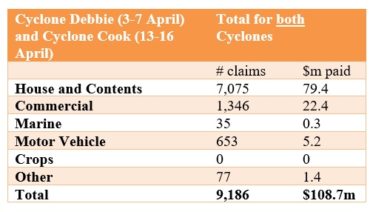 “The weather bombs we’ve had this year highlights the importance insurance plays when disaster strikes,” Grafton said. “We would hope that uninsured renters are now taking steps to ensure their contents are protected to see them through these types of events. And for homeowners that they check their sum insured is enough to rebuild in the event of a total loss.”

As of July 17, the Insurance Council of Australia reported that insured losses from Cyclone Debbie approached AU$1.4 billion from more than 67,000 claims, including 60,009 domestic claims (motor, building and contents) and 7,858 commercial claims (motor, property, business interruption and other).