Insured losses in mainland China from Typhoon Meranti between US$650 million and US$1.15 billion: AIR

Catastrophe modelling firm AIR Worldwide is estimating insured losses in mainland China from Typhoon Meranti earlier this month at between US$650 million and US$1.15 billion. 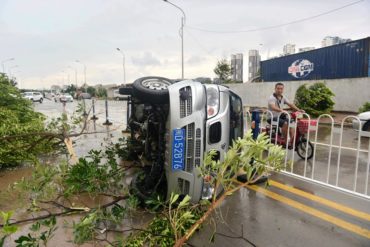 A man rides a scooter past an overturned vehicle and fallen trees after a typhoon in Xiamen in southeastern China’s Fujian province Thursday, Sept. 15, 2016. Typhoon Meranti, labeled the strongest storm so far this year by Chinese and Taiwanese weather authorities, made landfall in southeastern China early Thursday after previously affecting Taiwan. (Chinatopix via AP)

Typhoon Meranti experienced rapid intensification on Sept. 11-12, with wind speed increasing more than 150 kilometres per hour in a 24-hour period, according to the Joint Typhoon Warning Center. Super Typhoon Meranti delivered very strong wind, high storm surge and flooding precipitation to southern Taiwan as it passed through Luzon Strait near noon local time on Sept. 14, AIR said in a press release on Thursday.

The wide range in the estimate of US$650 million to US$1.15 billion in industry-wide modelled insured losses reflects “uncertainty in the meteorological parameters associated with this event. There is additional uncertainty in the take-up rates (insurance penetration) for much of the region,” AIR added in the release.

The loss estimates include insured physical damage to onshore property (residential, commercial and construction all risks/erection all risks) for both structures and their contents due to wind and precipitation-induced flooding in China, AIR said. The estimates also include AIR’s assumed take-up rates, or the percentage of properties in China that are actually covered against wind and flood damage.

Dr. Peter Sousounis, AIR Worldwide’s assistant vice president and director of meteorology, said in the release that the typhoon “was the strongest storm in the world this year and the most intense typhoon since Super Typhoon Haiyan struck the Philippines in 2013. Although Meranti did not make landfall on Taiwan, much of the country was impacted by high winds and substantial precipitation – rainfall totals as great as 700 millimetres (28 inches) have been reported – due to the massive, 560-kilometer (350-mile) wind field.”

After passing south of Taiwan on Sept. 14, Typhoon Meranti made landfall at 3:05 a.m. local time the following morning in Xiamen City in eastern China’s Fujian province. The typhoon then “weakened significantly” as it approached China and came ashore with a pressure the equivalent of a Category 4 hurricane – the strongest typhoon in the region since 1949.

As Super Typhoon Meranti passed through the Strait of Luzon, just off the southern coast of Taiwan, the storm brought rough seas, damaging surf, high storm surge and heavy precipitation – in addition to high winds – to southern Taiwan, resulting in downed trees and power lines, some coastal flooding and mudslides in mountainous regions. Dozens of injuries and one death were reported in Taiwan, AIR said in the release.

AIR’s loss estimates do not include losses to uninsured properties, infrastructure, crops, livestock, aquaculture and poultry, and auto. The estimates also do not include losses from storm surge, physical failure of flood defences, hazardous waste cleanup, vandalism or civil commotion, whether directly or indirectly caused by the event, demand surge and other non-modelled losses.

More News
Related
Meranti southeast China’s most powerful typhoon in decades
Estimated insurable losses from Louisiana floods to range between US$8.5 billion and US$11 billion: AIR Worldwide
Insured losses from Hurricane Hermine will likely not exceed US$400 million: RMS
Estimated insured losses for U.S., Caribbean from Hurricane Matthew US$2.5 billion to US$8 billion: RMS