Insured losses of New Zealand quake could be as much as US$3.5 billion: AIR Worldwide

The largest earthquake to hit New Zealand since 2009, registering magnitude 7.8, could contribute to insured losses amounting to US$762 million to US$3.5 billion, catastrophe modelling firm AIR Worldwide reported Thursday. 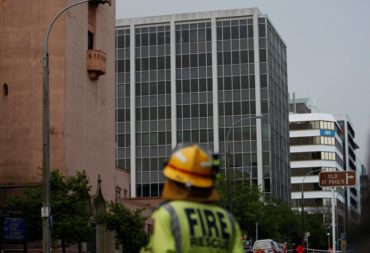 An emergency worker patrols a road cordon in Wellington, New Zealand Tuesday, Nov. 15, 2016, after officials determined a nine-story office building, center, is in danger of collapsing following a powerful earthquake. New Zealand on Tuesday began a rescue operation involving hundreds of tourists and residents who remain stranded in the coastal town of Kaikoura after a powerful earthquake cut off train and vehicle access. (AP Photo/Nick Perry)

The modelled estimates include insured physical damage to property (residential, commercial/ industrial), both structures and their contents from ground shaking; demand surge; and direct business interruption (BI) losses. It does not include losses to uninsured properties, land, automobiles, infrastructure and indirect BI, as well as loss adjustment expenses.

The massive tremblor struck New Zealand’s South Island near Hanmer Springs earlier this week, with the epicenter near the small tourist town Kaikoura, which lies half way between Christchurch and Wellington.

Kaikoura was cut off by landslides, notes a statement from AIR Worldwide. More than 134 buildings have been inspected, “resulting in 13 red tags denoting unsafe for use as well as 39 yellow tags denoting restricted use,” about 1,200 visitors and residents were evacuated and a local state of emergency was declared, the firm company adds.

“The seabed in the area has been raised by up to two metres in places, likely impacting the local fishing industry,” the statement reports.

There have been more than 80,000 landslides and 2,600 aftershocks recorded, notes Dr. Bingming Shen-tu, assistant vice president at AIR Worldwide.

Noting that the quake “was the largest experienced by the country since the 2009 M7.8 Dusky Sound earthquake and one of the four most powerful since 1855,” Shen-tu says gale-force winds, heavy rainfall and flooded roads have hampered recovery efforts.

Though much of the region impacted is rural and sparsely populated, “at least half of the losses from this event is reported in Wellington on the southern tip of North Island,” AIR Worldwide notes. Inspections have raised concerns about 60 or so buildings in the centre, it states. 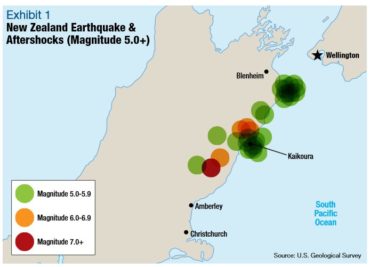 “Much of the central business district and waterfront of New Zealand’s capital is underlain by soft sediments, which amplify ground shaking and liquefaction damage has been reported there and on the Picton foreshore,” AIR Worldwide points out, adding that port operations have been suspended until further notice.

Christchurch has witnessed some damage, although far less than with the devastating earthquakes in late 2010 and early 2011. Damage in the Canterbury area, however, may account for up to 30% of the total losses, the company reports.

Throughout the area affected, glass has been broken in buildings, chimneys have collapsed and there has been some structural damage, notes AIR Worldwide.

“Building contents breakage has occurred widely, and power outages, disruption of water and sewer services, and interruption of phone service are reported,” it states.

“Some highways and rail lines in the affected region have been damaged, and many bridges and tunnels were closed after the initial quake pending inspection.”

Most residential damage will be covered by the government-owned insurer, the Earthquake Commission (EQC), which is backed by US$3.3 billion) in reinsurance.

EQC reported this week that people who have suffered damage to their home, land or contents from the earthquakes have three months to lodge their claim with the commission.

“It can take some time for the picture regarding claims to emerge as people come to terms with what’s happened and had a chance to take stock of what’s happened to their properties,” EQC chief executive Ian Simpson says in a statement.

In a briefing Thursday, A.M. Best Company Inc. reports “the insured losses from a series of earthquakes in New Zealand since November 14th, 2016 (local time) are likely to be material for some domestic insurance companies.”

The epicenter of the first quake, which was magnitude 7.8, was less than 100 km north of Christchurch and was felt throughout the North and South Islands. This was followed by a tsunami that arrived about two hours later, the briefing states.

“While the impact is still developing and strong aftershocks are being felt, A.M. Best expects that the number of reported insurance claims will continue to increase,” it adds.

Although the rating agency “does not expect to take rating actions on our rated companies in the near term,” the briefing points out, “New Zealand Non-Life could result in a moderate impact on the gross claims experience of general insurers. IAG and Vero Insurance are the major general insurers in the affected regions, such as Kaikoura and Wellington.”

IAG reported Thursday that “although the gross cost from the recent trans-Tasman storm and New Zealand earthquake events is still uncertain, it is anticipated that a net cost up to $200 million will be incurred.”

After consideration of its reinsurance protection, it notes, “IAG continues to expect its FY17 net natural peril claim costs will be in line with its $680 million allowance.”

As of close of business on Nov. 17, “the claims number for the New Zealand earthquake was over 700, comprising a mixture of mainly home and commercial,” the company statement adds.

“A.M. Best believes that claims from the earthquakes are likely to undermine the underwriting performance of some large insurers, especially those with high-risk accumulation in the upper South Island and the lower North Island,” the briefing notes.

“Yet, it is too early to determine the exact impact that the earthquake will have on the financial condition of the New Zealand insurance sector as a whole,” it continues.

“For most insurers, reinsurance is expected to reduce the overall impact on the sector. Nevertheless, the degree of severity to which their underwriting results could be affected will vary by each insurer’s gross exposure, deductibles, retention levels and adequacy of its reinsurance programs.”

“Since the Canterbury Earthquakes in 2010-2011, most general insurers in New Zealand have already moved to ‘sum insured’ policies for home insurance, rather than ‘full replacement’ covers. In addition, deductibles have generally increased for commercial insurance in recent years,” the briefing explains.

“Altogether, these suggest that the impact on our rated companies in relation to this event is unlikely to be as severe as the Canterbury earthquakes in 2010-2011.”

The Insurance Council of New Zealand (ICNZ) reported earlier this week that there has been some disruption to the availability of insurance for people seeking new or increased insurance cover.

“Globally, it is typical after a significant natural disaster for insurers to place a widespread embargo on new business or requests to increase existing cover,” ICNZ notes in a statement, adding that insurers are currently working to minimize disruption.

“The reason for insurers to be cautious is to minimize additional losses in order to meet reinsurers needs and keep insurance affordable for all,” the statement notes.

“Insurers need to make prudent decisions to minimize the risks they take on in an uncertain environment,” it adds.