Insured losses from California’s October wildfires now top US$3 billion – a three-fold increase in just two weeks – according to updated claims loss data from the California Department of Insurance. 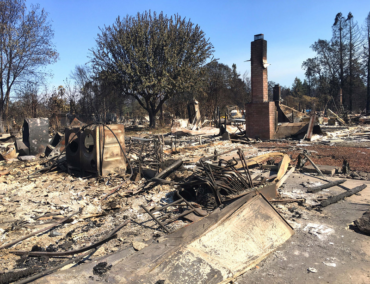 Fifteen major insurers reported the updated $3.32 billion estimate to Insurance Commissioner Dave Jones and the state insurance department said in a press release on Tuesday that the insured losses “are expected to climbed higher still.”

“As shocking as US$3 billion in insured losses are, the number is sure to grow, as more claims are coming,” Jones said in the release. “The insured losses only tell part of the tragic story of the October fires. We must remember that 43 people lost their lives and behind every insurance claim is someone who has lost their home, their business, and their precious memories. It will take years for these communities to recover and rebuild.”

The latest assessment notes the wildfires damaged or destroyed more than 14,700 homes, 728 businesses and more than 3,600 private autos, commercial vehicles and agricultural equipment and watercraft.

In mid-October, Jones issued a notice to insurers asking them to “expedite claims, by cutting through red tape and doing all they can do to help policyholders who are likely to have little or no documentation that insurers normally require,” the California Department of Insurance said in the release. He also signed a “declaration of an emergency,” which allows insurers to tap out-of-state claims adjusters from their other offices and “effectively expands their claims adjuster workforce,” the release explained. “When processing tens of thousands of claims, this is an important step in increasing the claims processing capacity for insurers and helping speed the recovery and rebuilding process.” 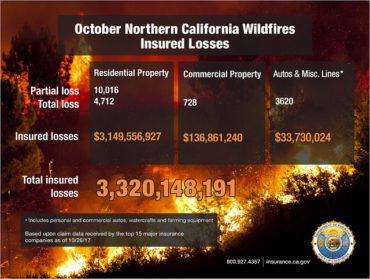 On Oct. 19, the insurance department released preliminary data indicating US$1.045 billion in losses. The data was provided by eight state insurers “processing claims for tens of thousands of policyholders,” the department said at the time.

The following day, RMS estimated the economic losses for the wildfires impacting Sonoma, Napa, Solano, Lake and Mendocino counties at between US$6 billion and US$8 billion. This range includes loss due to property damage, contents and business interruption caused by the fires to residential, commercial, and industrial lines of business, noted Kevin Van Leer, RMS’ senior product manager, in a blog post. Auto or agricultural crop losses are not included in the estimates. High penetration rates of wildfire coverage in standard homeowners and commercial policies implies similar insured losses, Van Leer suggested.

“With reports of 8,400 damaged or destroyed structures, this indicates that the proportion of properties affected equates to roughly 70 to 75 per cent, which is the highest proportion observed in the RMS review of historical events of this scale and magnitude,” Van Leer wrote in the blog. “Research has shown typical percentages of affected structures ranging between 15 to 50 per cent.”