Insurer losses not yet translating into property price hikes: broker

Brokers expecting to see price hikes in property lines after last year’s devastating hurricanes may have good news for clients, at least in the short term.

“Long term, all of the carriers will need to increase pricing and they would all like to, and they are probably telling their brokers they should be,” said Chris Zoidis, corporate senior vice president at wholesale brokerage Burns & Wilcox, in an interview Friday with Canadian Underwriter. “The problem is, there is so much capacity there seem to be a lot of alternatives, where if they increase prices, they lose too much business.” 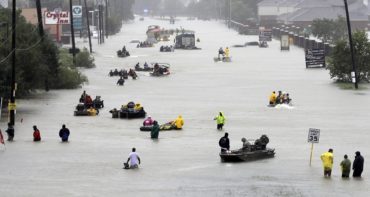 FILE – In this Aug. 28, 2017, file photo, rescue boats float on a flooded street as people are evacuated from rising floodwaters brought on by Tropical Storm Harvey in Houston. The National Hurricane Center’s official report on Harvey compiles staggering numbers, starting with 68 dead and $125 billion in damage. But the really big numbers in the Thursday, Jan. 25, 2018, tally have to do with the rainfall that swamped Houston. Two places had more than five feet of rain. Eighteen different parts of Texas logged more than four feet of rain. (AP Photo/David J. Phillip, File)

In Canada, customers buying property or general liability insurance are generally either seeing the same price as last year or a slight price drop at renewals, Zoidis added.

Zoidis made his comments just after Lloyd’s reported Wednesday that its 2017 accident year combined ratio, excluding major claims, was 98.4%. That figure is “sort of a sign that years of pricing declines are having an effect on the profitability of insurance,” said Zoidis, who works out of Burns & Wilcox’s head office in Farmington Hills, Mich. “That would be the case in Canada as well.”

Lloyd’s “major claims” in 2017 included three North Atlantic hurricanes (Harvey, Irma and Maria);  wildfires in California and in Chile; an earthquake in Mexico; and Cyclone Debbie, among others. Major claims cost the Lloyd’s market 4.54 billion British pounds in 2017. By comparison, major claims in 2016 (including the Fort McMurray wildfire) cost the Lloyd’s market 2.05 billion pounds. The pound was trading last week at $1.82. It was lower in 2017, fluctuating between $1.58 and $1.78.

Those figures are based on combining financial information that the syndicates (which are owned by insurers) provide to the Corporation of Lloyd’s.

This loss did not surprise Zoidis.

“There was the general view that even though these were storms isolated to the Caribbean and the southeast U.S., they were going to have a ripple effect through the entire market, whether that be property in Canada or general liability,” Zoidis said Friday.

But “these storms occurred after multiple years with soft markets and price declines across all lines of business,” he added. While the general prediction was that rates would go up across the market, most rate increases were restricted to areas affected by the storms, he suggested.

“What really played out was [that] capacity across the insurance industry in the U.S. and Canada did not restrict,” he said. “In fact, it continued to expand.”