Insurers that carry out a significant acquisition outperform their peers, with the strongest outperformance in North America: study

Insurance firms that carry out a significant acquisition outperform their peers, with the strongest outperformance seen in North America, followed by Europe and Asia-Pacific, according to a new study. 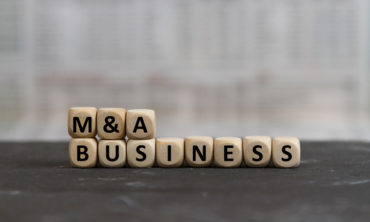 Based on analysis from Willis Towers Watson (WTW) and the University of London’s Cass Business School in the United Kingdom, the Insurance M&A Success Tracker explores the performance of insurance companies that carry out major acquisitions against their sub-industry and regional indexes. The report, released earlier this week, found that insurers that carry out a significant acquisition outperform their sub-industry index, investors take time to give credit for the benefits of these acquisitions and the strongest outperformance is seen in North America, followed by Europe and Asia-Pacific.

The research is based on an analysis of all deals with a value of more than US$50 million conducted in the insurance sector since 2008. It found that insurers making acquisitions subsequently delivered significantly better share price performance than their peers.

“Acquirers’ share prices outperformed the insurance subsector index by an average of 3.7 percentage points in the sample time period,” the report said. “Moreover, this trend has become more pronounced in recent times. Looking specifically at deals that have taken place since 2013, the typical share price outperformance of acquiring insurers was 8.5 percentage points above the sub-industry index. By 2015, the figure had risen to 12.5 percentage points.” 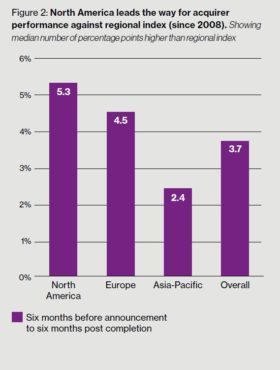 The effect was especially visible in North America, where acquiring insurers saw their shares outperform their local sector index by an average of 5.3 percentage points over the periods studied since 2008. In Europe, the equivalent figure was 4.5 percentage points and it fell to 2.4 percentage points in the Asia-Pacific region.

One of the factors driving outperformance among acquirers has been their expansion into new territories, the report said, using the example of companies looking to increase their presence in emerging markets across Eastern Europe, South America and Asia. One “standout” deal from 2016 was Spain’s Mutua Madrilena taking a 40% stake in Chilean P&C insurer Seguros Generales for US$222 million, WTW reported.

In addition, some companies have benefitted from divesting non-core assets and investing in companies or regions “which play to their strengths,” the report said, using the example of Aviva selling assets to concentrate on key regions. “Over the past few years, Aviva identified that only a few countries were going to be core, the U.K. being one of them,” said WTW’s Andy Staudt, Property and Casualty (P&C) M&A practice leader for Europe, the Middle East and Africa. “The company sold its U.S. business, for example. But with the U.K., this was a turnaround to go into acquisition mode. The U.K. was identified as core so they were playing to their strength in this market and consolidating there.”

WTW’s Scott Spearman concluded that “while our figures show that these deal ultimately pay dividends, it takes time to garner results from cross-border M&A. You don’t necessarily get the uplift immediately when you move into a new geography.”