Wildfires that hit British Columbia earlier this year and that continue to affect California are among the effects of climate change, says Karen Gavan, former CEO of Waterloo, Ont.-based Economical Insurance. 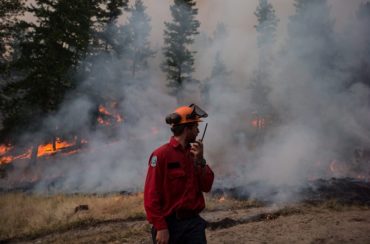 “Literally California has been burning all fall,” said Gavan, a Toronto resident who currently serves on the board of Swiss Re America Holding Corporation, in a phone interview Monday.

Also, this year has been one of the “worst wildfire seasons” for British Columbia, Gavan added.

Quoting Catastrophe Indices and Quantification Inc. (CatIQ), Insurance Bureau of Canada (IBC) reported in September that wildfires this past summer in the Williams Lake and Elephant hill areas of B.C. have caused more than $127 million in insured damage.

South of the border, wildfires that hit northern California in October caused insured losses of more than US$9.4 billion, the state’s insurance department reported Dec. 6.

The Thomas fire, which broke out two weeks ago, is 45% contained but still threatens areas northwest of Los Angeles, including Ventura and Santa Barbara counties, The Associated Press reported Monday. The Thomas fire has burned more than 1,000 structures, including at least 750 homes, AP reported.

“I think societies need to adapt to the changes and prepare for the impacts of climate change,” she said. “I don’t think we are going to reverse it or undo it. I think we have to adapt.”

The risk of damage from extreme weather — including floods, convective storms, hurricanes and hail — is increasing, said Rob Wesseling, CEO of The Co-operators Group Ltd., in an interview Friday.

Climate change “is not just an insurance industry discussion,” Wesseling added. “As a society in Canada, we need to resolve ourselves to put our homes, businesses and critical infrastructure in places we can afford to defend them.”