Irma losses in U.S. and Caribbean could reach $50 billion while Jose could cause ‘minor to moderate coastal flooding’ in New England

As the United States National Weather Service warns of the possibility of more than 125 mm of rain over two days in southern Rhode Island and southeast Massachusetts, Munich Re is suggesting two recent North Atlantic hurricanes might cause it to post a third-quarter loss and The Travelers Companies Inc. suggests its after-tax losses from Hurricane Harvey alone will exceed US$200 million. 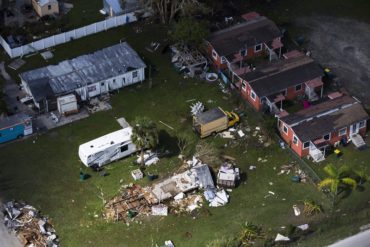 Travelers reported Sept. 9 it estimates its catastrophe losses relating to Hurricane Harvey, including estimated recoveries from reinsurance, will be “in the range” of US$375 million to US$750 million before tax, or US$245 million to US$490 million after tax.

In a paper released in 2016, Swiss Re reported that 2015 was the 10th year in row that no major hurricane made U.S. landfall, the longest stretch since the 1860s. In that paper – Natural Catastrophes and Man-Made Disasters in 2015 – Swiss Re noted that Hurricane Katrina topped the reinsurer’s list of the most expensive natural catastrophes from 1970 through 2015. Katrina produced insured losses, adjusted to 2015 US dollars, of $79.6 billion, Swiss Re reported. Among other things, Hurricane Katrina caused major flooding in New Orleans in 2005.

On Sept. 10, 2017, Hurricane Irma made two landfalls in Sept. 10 in southwest Florida. Two days earlier, it made landfall in Cuba, causing major flooding in Havana.

Combined industry insured losses from Irma, for the U.S. and the Caribbean, are estimated to range from US$32 to US$50 billion, Verisk Analytics Inc.’s AIR Worldwide unit said Sept. 15.

AIR Worldwide’s estimate for the US alone is US$25 to US$35 billion, the company added.

Meanwhile, due to Hurricane Jose, the U.S. National Weather Service reported at 11:00 a.m. Monday it has issued a tropic storm warning from Watch Hill, Rhode Island east and north to Hull, Mass. That area that includes Martha’s Vineyard and Nantucket.

“While the center of Jose is currently forecast to remain offshore of the U.S. coast, the large cyclone is expected to cause some direct impacts in portions of New England,” the National Hurricane Center said Monday.  “Minor to moderate coastal flooding is possible from Delaware to southern New England during the next several days.”

Jose is expected to produce three to five inches (76 to 127 mm) of rain Tuesday and Wednesday “over eastern Long Island, southeast Connecticut, southern Rhode Island, and southeast Massachusetts,” the National Weather service warned. “While the risk of flooding is currently limited in scope, any deviation to the left of the forecast track, could bring heavier and more widespread rainfall to southern New England, Long Island, New York City, and New Jersey.  If this deviation were to occur, the risk of urban flash flooding and some river flooding would increase.”

With maximum winds of 185 miles per hour (298 km/h) for 37 hours, Hurricane Irma was “the longest any tropical cyclone around the globe has maintained that intensity on record,” Impact Forecasting added, noting that Jacksonville, Fla. had the “biggest storm surge ever recorded” when the St. Johns River burst its banks.

“Although accumulating the loss estimates from Irma will take time, the storm’s westerly path and less-than-expected intensity will result in a material reduction of many initial forecasts,” ratings firm A.M. Best Company Inc. said Thursday in a briefing, Hurricane Irma Tests Newer Participants in Florida Market.

“At first, the storm was expected to hit the eastern part of Florida, particularly Miami, as a Category 4 or 5, and possibly result in $100 billion or more of insured losses,” A.M. Best said in the briefing, adding it “expects Irma to be more of an earnings event for A.M. Best-rated reinsurers, given that balance sheets are extremely strong and have been stress-tested sufficiently to absorb extreme losses.”

Fitch Ratings reported Sept. 12 that “the combined high end of estimated losses from both Hurricanes Irma and Harvey” is US$85 billion.

“Fitch believes if losses ultimately reach this level, or higher, there may be select (re)insurers with concentrations across each locale that, added together, could adversely affect capital,” Fitch added. “However, we believe such cases will not become evident until (re)insurers provide their own specific loss experience.”

Munich Re reported Sept. 13 that both Irma and Harvey “are expected to result in high insured losses, which the market and Munich Re are unable to quantify at the moment.”

The losses from those disasters “could mean that Munich Re might miss its profit guidance” of 2 to 2.4 billion euros, “depending on how the business performs until the end of 2017,” Munich Re noted. “The figures for the third quarter of 2017 will probably show a loss.”

The third and fourth most expensive natural catastrophes from 1970 through 2015 were Hurricane Sandy (2012) and Andrew (1992), with inflation-adjusted losses of $36.1 billion and $27 billion respectively, Swiss Re reported in early 2016 in Natural Catastrophes and Man-Made Disasters in 2015.