Is sinkhole damage covered under a standard home insurance policy?

Editor’s Note: This story has been edited to include additional comments.

Is damage from a sinkhole covered under a standard homeowner’s policy?

“Earth movement” is typically excluded under a standard policy, but an earthquake endorsement may provide coverage. 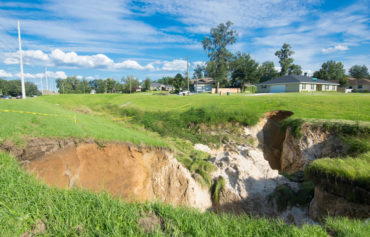 The issue came to light recently following media reports that a family that lost its home to a sinkhole in Falmouth, N.S. was planning legal against their insurance company because it wouldn’t cover the cost of the home. CBC reported Apr. 21 that the homeowner and her daughter were home the morning the sinkhole opened up under their house on Sept. 3, 2017.

An investigation determined that the house collapsed because of “movement of earth,” an exclusion in their policy. It is unclear if the homeowner purchased an endorsement. The homeowner told CBC they are hoping to recover the value of the home, as well as purchases made following the collapse.

“Sinkhole is covered under earth movement, which is typically coverage that you would get if you have an earthquake endorsement,” Pete Karageorgos, director of consumer and industry relations for Ontario with the Insurance Bureau of Canada (IBC), told Canadian Underwriter Monday. “Landslides, sinkholes and earthquakes are all part of that earthquake endorsement. If you have a standard home insurance policy, they wouldn’t be covered.”

He was speaking about the issue in general and not to the specific case in question.

As an industry, it’s important to know that “earthquake is more than just when the earth shakes,” Karageorgos added.

The insurer in this case, Wawanesa Mutual Insurance Company, told Canadian Underwriter Thursday that it does not publicly comment on the specifics of any claim or discuss matters currently under dispute to protect the interests and privacy of its policyholders. However, it said insurers offer very similar earthquake endorsements aligned to an advisory from IBC. The endorsement of Wawanesa’s endorsement is as follows: “earthquake shall include snowslide and landslide occurring concurrently with and resulting from an earthquake shock and other natural or man-made earth movements resulting from mining or fracking operations.”

Wawanesa said this endorsement is offered because personal property policies in Canada, similar to the IBC advisory wording and theirs, exclude damages as follows: “caused directly or indirectly, in whole or in part by snowslide, earthquake, landslide or any other earth movement, regardless of any other cause or event that contributes concurrently or in any sequence to the loss or damage.”