Liability surrounding vaping is being thrust into the spotlight after a London, Ont. high school student was temporarily put on life support from a suspected “severe respiratory illness” associated with smoking electronic cigarettes.

“There were lawsuits many years ago to determine liability if you were smoking cigarettes; that’s all extremely well-documented,” said Gary Hirst, president of CHES Special Risk. The managing general agency places coverage for buildings, contents, equipment and business interruption, among other things, for vape stores. “There are health exclusions on those [vaping] policies and that is standard market practice.” 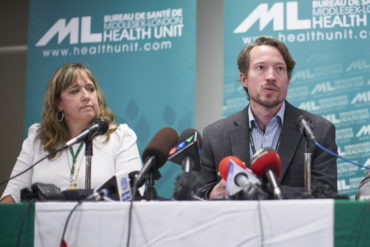 Dr. Chris Mackie, Medical Officer and CEO of Health for the Middlesex-London Health Unit speaks during a press conference in London, Ont., Wednesday, September 18, 2019 as Linda Stobo, manager, Chronic Disease and Tobacco Control at the unit looks on. The announcement involved the first known case in Canada of severe pulmonary illness linked to vaping. THE CANADIAN PRESS/Geoff Robins

In the United States, there have been more than 800 “lung injury” cases from vaping reported from 46 states and one U.S. territory. Twelve deaths have been confirmed in 10 states.

The London, Ont. teen is believed to be the first reported case of a suspected vaping-related illness in Canada. Although the teen recovered at home, the incident raised questions and prompted local health officials to hold a rare press conference on the incident. The province also ordered hospitals to start collecting and reporting data on vaping-related cases of severe pulmonary disease.

“We know very little about the long-term effects associated with e-cigarettes, but our findings so far are enough to convince us of the need to advise the public,” Dr. Chris Mackie, chief medical officer of health for Middlesex-London, told the London Free Press recently.

What are some of the unique risks of vaping, which is sometimes considered a “safer” alternative to smoking? There is the “potential for injury because you’re inhaling something into your lungs that can be these additives of different flavours,” Hirst said.

“Really, there’s no research done on these flavours and they’re not sanctioned by the Surgeon General and, of course, cigarettes come with a big warning on the side. I think these vape liquids and machines come with a warning, but unfortunately, I think a lot of these things are untested and as a result, it’s causing injury to users.”

Another consideration is the machine itself – the e-cigarette. “Now, there have been – and there continue to be – instances of malfunction,” Hirst said, noting that this could be a products liability issue. “In certain instances, although it’s now a couple of years ago, these machines have actually caused injury whilst they’re being used because the battery has malfunctioned.”

One of the problems with this in the past has been trying to subrogate against the manufacturers, which are often in East Asia.

Hirst compared vaping to rock climbing, where the likelihood of falling is rare, but it is still an activity that could be dangerous.