A winter storm in central and eastern Canada at the beginning of the year caused more than $54 million in insured damage, with the majority of damage being in Quebec, Catastrophe Indices and Quantification Inc. (CatIQ) reported Thursday.

Of the insured damaged, $33 million was in Quebec and more than $12 million occurred in Ontario. The remainder occurred in the four Atlantic provinces, the Insurance Bureau of Canada (IBC) said in a press release. 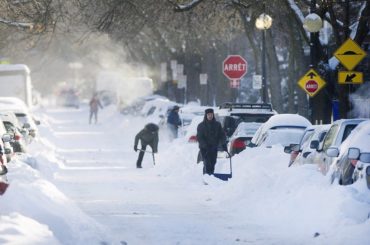 People clear snow from around their cars following a major snowstorm in Montreal, Sunday, January 14, 2018. THE CANADIAN PRESS/Graham Hughes

Craig Stewart, vice president of federal affairs with IBC, says climate change is causing severe weather events to happen more frequently and with greater intensity, especially storms involving floods. “While the insured damage from these floods is significant, the total economic cost to homeowners and government is not yet known,” he says.

Because flooding can cause significant damage in a short amount of time, it is “critically important” for consumers to know what their policies cover and whether they have overland flood protection, Stewart noted.

CatIQ did not deem an earlier winter storm, which caused storm surges and extensive power outages in Atlantic Canada beginning on Jan. 4, a catastrophe event. While it did not meet the $25-million threshold for insured property damage to be a cat event, it was a “notable event,” meaning losses ranged between $10 million and $25 million.

The Canadian Press reported on Jan. 5 that the storm left an estimated 125,000 customers without electricity across Nova Scotia. The event flooded coastal roads, battered sailboats and downed trees with hurricane-force winds gusting to 140 km/h. In New Brunswick, more than 130 outages affected 11,000 customers throughout the province, which was also hit with heavy snowfall. Prince Edward Island was also largely left in the dark.