January 20, 2017   by Paolo Santalucia and Gregorio Borgia - THE ASSOCIATED PRESS

FARINDOLA, Italy – With cheers of joy, rescue crews pulled survivors from the debris of an avalanche-crushed hotel in central Italy on Friday, an incredible discovery that boosted spirits two days after the massive snow slide buried around 30 people at the resort. Two children were among those rescued. 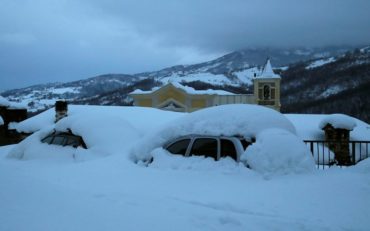 Cars are covered in snow in Farindola, central Italy, Thursday, Jan. 19, 2017. Days of heavy snowfall had knocked out electricity and phone lines in many central Italian towns and hamlets, compounded by four powerful earthquakes that struck the region on Wednesday, and an avalanche which buried a four-star spa hotel near Farindola. (AP Photo/Gregorio Borgia)

First word of the discovery came at around 11 a.m., news that was met with exhilaration since at least four people had already been found dead after the avalanche hit Wednesday afternoon and dumped upwards of 5 metres (16 1/2 feet) of snow on the hotel.

Video released by rescuers showed a boy, wearing blue snow pants and a matching ski shirt, emerging from the structure through a snow hole. Emergency crews mussed his hair in celebration.

Next came a woman with a long ponytail wearing red snow pants, appearing fully alert. Both were helped to a stretcher for the helicopter ride out.

About 30 people were trapped inside the luxury Hotel Rigopiano in the Gran Sasso mountain range when the avalanche hit Wednesday after days of winter storms that dumped up to 3 metres (nearly 10 feet) of snow in some places. The region was also rocked by four earthquakes on Wednesday but it was not clear if any of those set off the avalanche.

Two people initially survived the devastation and called out for help. One of them, Giampiero Parete, had called his boss and begged him to call in rescue crews because his wife and two children were inside.

The wife, Adriana Vranceanu, 43, and son Gianfilippo, were reunited with their father at the hospital in Pescara on Friday, ANSA news agency and state-run RAI radio said. The fate of their daughter, Ludovica, wasn’t immediately known.

The number of the survivors found and extracted from the rubble evolved over the course of the day.

“We found five people alive. We’re pulling them out. Send us a helicopter,” a rescuer said Friday over firefighters’ radio, overheard by Associated Press journalists making their way on foot toward the disaster site.

Later, the number rose to eight people, including two children, although the civil protection agency itself would only confirm six survivors found.

Firefighter Giuseppe Romano then said more positive news was unfolding: “There are signs from other people. Other people are responding to our requests,” he told Sky Tg24.

Rescue crews said the first group of survivors had been found in a kitchen area, and had survived thanks to an air pocket that formed when reinforced cement walls partially resisted the avalanche’s violent power.

“It’s probable that they realized the risk and took protective measures,” Romano said.

Those being rescued were in remarkably good condition and were being flown to area hospitals, rescue workers said.

Titi Postiglione, operations chief of the civil protection agency, also said the survivors would be helping rescuers trying to find others trapped in the hotel.

“They can give us a series of indications to help with our intervention plan, information to understand what happened and help direct the search,” she said.

Search-and-rescue teams had maintained the hope of finding survivors even though the avalanche covered the hotel with up to 5 metres (16 1/2 feet) of snow.

Two bodies were recovered on the first day of searching and RAI state TV reported that two other bodies had been located but not yet removed.

The operations have been hampered by difficulty in accessing the remote hotel, located 180 kilometres (112 miles) northeast of Rome and close to the Adriatic city of Pescara.

Workers have been clearing a 7-kilometre (5.5-mile) road to bring in heavier equipment, but the mountain road can handle only one-way traffic and is covered not only by 10 feet of snow but fallen trees and rocks.

Whatever #Italy's highest honour is,the rescuers at the #hotelrigopiano should be getting it…amazing bravery pic.twitter.com/tkzT4W4V5t

Days of heavy snowfall had knocked out electricity and phone lines in many central Italian towns and hamlets, and the hotel phones went down early Wednesday, just as the first of four powerful earthquakes struck.

The force of the massive snow slide collapsed one wing of the hotel and rotated another off its foundation, pushing it downhill.

Parete reported that the guests had all checked out and were waiting for the road to be cleared to be able to leave. But the snowplow scheduled for midafternoon never arrived and the avalanche hit around 5:30 p.m. Wednesday.

Prosecutors have opened a manslaughter investigation into the tragedy and are looking into whether the avalanche threat was taken seriously enough, according to Italian media.

Farindola Mayor Ilario Lacchetta said the hotel had 24 guests, four of them children, and 12 employees onsite at the time of the avalanche.

An Alpine rescue team was the first to arrive at the hotel on cross-country skis after a 7-kilometre (more than 4-mile) journey that took two hours. They found Parete, a guest who escaped the avalanche when he went to his car to get something, and Fabio Salzetta, a hotel maintenance worker, in a car in the resort’s parking lot.

Parete was taken to a hospital while Salzetta stayed behind to help rescuers identify where guests might be buried and how crews could enter the buildings.

The mountainous region of central Italy has been struck by a series of quakes since August that destroyed homes and historic centres in dozens of towns and hamlets. A deadly quake in August killed nearly 300 people. No one died in strong aftershocks in the region in October, largely because towns had already been evacuated.

Nicole Winfield in Rome, and Colleen Barry in Milan, contributed to this report.

#ItalyEarthquake Rubble and debris of a destroyed building covered with snow in the damaged the village of Amatrice. #AFP by @ADS4AFP pic.twitter.com/CZyjsDxdtq