TORONTO – Members of a Canadian class-action lawsuit against Volkswagen can submit claims for reimbursement starting on Friday after an Ontario court approved a $2.1-billion settlement plan. 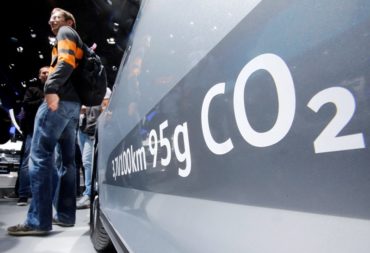 In this Sept. 22, 2015, file photo, the amount of carbon dioxide emissions is written on a Volkswagen Passat Diesel at the Frankfurt Car Show in Frankfurt, Germany. On Friday, April 21, 2017, a judge ordered Volkswagen to pay a $2.8 billion criminal penalty in the United States for cheating on diesel emissions tests, blessing a deal negotiated by the government for a massive fraud orchestrated by the German automaker. (AP Photo/Michael Probst, File)

The 105,000 people who purchased or leased certain Volkswagen or Audi vehicles with two-litre diesel engines that were caught up in an emissions cheating scandal will each receive a payment between $5,100 and $8,000, wrote Superior Court Justice Edward Belobaba in his judgment Wednesday.

Many will also have the choice either to return their vehicle at the buy-back price as of mid-September 2015 before the so-called defeat device was made public or keep their car and receive an emissions modification that is approved by government regulators, he wrote.

“(The settlement) does its best to respond to people who are in different situations and have different concerns,” said Charles Wright, a partner at Siskinds law firm in London, Ont., and one of the lead lawyers in the case.

For the people who love their cars, it offers the ability to keep them, while those who want to get rid of them as soon as possible can do so, he said.

Meanwhile the damages payment can cover any costs car owners incurred as a result of the scandal, Wright said. For example, someone who purchased a roof rack that fits a Volkswagen vehicle they intend to return can buy a new roof rack for their new vehicle with the money.

There is the chance that further litigation in this case will happen.

If emissions modifications for any of the vehicles are not approved and implemented around summer 2018, and the owner chooses not to return their vehicle, Wright said, they can choose to continue litigation. If enough such owners come forward, the court may choose to hear the case again as a class-action suit, he said.

Volkswagen has provided a fix for one generation of the vehicles, and a fix for the other two generations is being assessed for approval by U.S. regulatory authorities, he said.

Volkswagen Group said in a statement last week, after two provincial courts approved the settlement agreement, that the settlement is not an admission of its liability.

Volkswagen Group Canada did not immediately return request for comment.