Several evacuation orders related to the Kenow wildfire have been lifted, while others remain in effect as the fire continues burning in southwestern Alberta about two weeks after it was initially discovered. 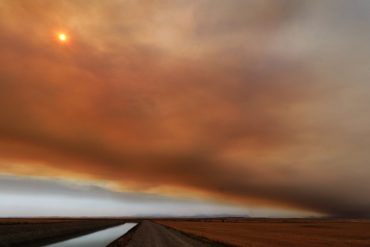 Smoke from the wild fire in Waterton Lakes National Park, blows over the Blood Reserve, near Stand Off, Alberta, Tuesday, September 12, 2017. THE CANADIAN PRESS/David Rossiter

Mandatory evacuation orders remain for all areas of Waterton Lakes National Park and Castle Mountain Resort, while a state of local emergency remains in effect for Cardston County, the M.D. of Pincher Creek and the Blood Tribe.

The government reported that the Kenow wildfire covered 36,000 hectares as of 11:30 a.m. on Thursday. “Conditions for firefighting have improved for a third consecutive day with a cold front bringing cooler moist air, showers and higher humidity into the region,” the statement said. “Because of the colder weather, the fire is not expected to continue growing significantly.”

During the fire, 675 homes were without electricity. FortisAlberta had restored power to 254 homes as of 5 p.m. on Thursday and was working to restore power to the remaining customers. The electricity provider reported on its blog on Thursday that “damage to FortisAlberta poles, wires and other equipment is extensive in certain cases and, given the additional challenge of off-road terrain and access issues, may require up to five days to complete repairs.”

A few photos of my family's ranch after the #WatertonFire #kenowfire #twinbutte. All 160 acres are scorched. House is safe. pic.twitter.com/qdiyyqKhWN

The agriculture and forestry ministry noted  that residents will be notified by local government officials if their property was damaged or destroyed by the wildfire.

On Friday, the Canadian Press reported that Alpine Stables in the Waterton Lakes National Park area, a family-run horse ranch that offered guided trail rides to visitors, was destroyed. The visitor centre was also razed, as was the structure at the East Gate warden station, along with its equipment and vehicles, the Canadian Press said, quoting Parks Canada. Just outside the national park, a red log house, feed yard, barn and arena of the Rocking Heart Ranch were destroyed. The Crandell Mountain campground was also “significantly damaged,” and outlying infrastructure around the Parks Canada operations compound and bison paddock was affected.

Parks Canada said it will continue to assess the damage.

We just did a fly over of the Waterton and MD of Pincher Creek fire and the damage is incredible, but also some miracles.

Yesterday evening vs. Street View images. Trying to gain some idea of how crazy last night was. Images from MD of Taber FD. #WatertonFire pic.twitter.com/ysevarS2ig