MONTREAL – A new group of mostly Lac-Megantic residents is seeking authorization from Quebec Superior Court to sue for economic and moral damages worth upwards of $5 million relating to the Lac-Megantic rail tragedy in 2013.

Train engineer Tom Harding, Canadian Pacific Railway and Montreal, Maine & Atlantic, the defunct railway company at the heart of the disaster, are named in the court document filed in mid-May. 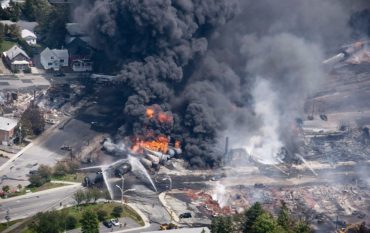 The motion to institute proceedings was filed in Lac-Megantic and involves 49 plaintiffs who opted to not join another, massive class-action with 5,000 people and businesses that was authorized in 2015 against the same defendants.

Earlier this year, the judge hearing that case joined it with a $409-million Quebec government lawsuit and another lawsuit brought by insurance companies. That one trial is to be heard in September 2019.

On July 6, 2013, a runaway train hauling tanker cars loaded with volatile crude oil broke loose and barrelled into the town of 6,000 in the wee hours before derailing and exploding.

It set off several massive blasts that wiped out a large swath of the downtown core and killed 47 people.

One month later, the Crown announced it would not appeal the verdicts.

The new filing, like the other legal challenges against the railway, alleges that Canadian Pacific was negligent in the leadup to the accident and should have known the product being shipped was volatile. It also states the company had responsibility for the cargo being shipped.

A Canadian Pacific spokesman said there would be no comment as the matter is under litigation, but the railway giant has previously denied any responsibility in the disaster because it handed off the trains to MMA for the final leg of the journey.

The new motion describes the plaintiffs as people who resided in the Lac-Megantic area, owned or leased property there or were physically in the area at the time of the disaster and suffered losses.

The motion says the amounts are being sought for various reasons, including stress, being forced from home and the loss of income, personal property or enjoyment of life.

Charles Shearson, Harding’s lawyer, said his client’s name remains on the list of defendants despite his limited means.

“It’s another legal problem,” Shearson said. “I think his ultimate goal is to get all the legal processes out of the way so he can embark in some kind of healing, some kind of semblance of regaining a normal life for himself, given the circumstances.”