Landslide alert issued in same B.C. community where four were killed in 2012

JOHNSONS LANDING, B.C. – A tiny British Columbia community where four people were killed in a landslide almost five years ago has been warned of another possible slide. 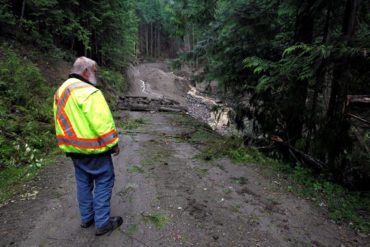 An employee of the B.C. Ministry of Transportation surveys a road Sunday, July 15, 2012 that was torn away by a landslide that buried three homes and has left four people unaccounted for in Johnsons Landing, B.C. A report on the disaster in May said the landslide was caused by heavy rain and a late-spring snowmelt that set off what was the largest slide to hit the region in the last 12,000 years.THE CANADIAN PRESS/Jeff McIntosh

An evacuation alert has been issued for residents of Johnsons Landing on Kootenay Lake in southeastern B.C. after reports that Gar Creek was running muddy and materials on a slope above appeared to be shifting.

A slide from Gar Creek in July 2012 released a torrent of mud and debris, killing a man, his two daughters, and a German woman in a separate home.

It also destroyed or damaged several homes in the community.

Anitra Winje, spokeswoman for the Regional District of Central Kootenay, said crews flew over the area Monday and determined that about 500 cubic metres of debris had sloughed off a high slope, with some of it rolling into the creek.

The flood didn’t cause any injuries or structural damage, Winje said, but residents were asked to stay away from the creek and the evacuation alert was issued as a precaution.

The alert involves between 50 and 60 homes, but many of them are seasonal, Winje said.

She said residents in about 10 occupied homes have been warned that they may need to leave at a moment’s notice.

A reception centre has been set up in the nearby town of Argenta and counselling is available to residents, she added.

“We want to be sensitive to the needs of our residents and, of course, their safety is paramount,” Winje said.

The community’s history prompted extra precaution because the 2012 landslide was “such a devastating event,” she added.

“When we heard this, it made us nervous. And we just wanted to make sure again that our public is safe there, so that’s why we acted so quickly.”

A report released by the regional district in May 2013 blamed the tragedy on a deluge of rain and a late spring snowmelt and identified 18 properties that remained at risk.

But Johnsons Landing resident Angele Ortega said in a telephone interview on Monday that she isn’t concerned about the latest alert.

“Mountains fall down all the time. And what we have is an unstable bank right now,” said Ortega, who co-founded a retreat across the ravine from where the deadly slide took place.

Even if there was another major slide, the creek bed is much bigger now than it was in 2012 and it could handle a much larger volume of debris, she said.

“There is no danger. None,” Ortega said, adding that it is still good to be cautious.

A snowy winter followed by a wet spring has left ground in the region “completely saturated” and there have been a number of slides in the area recently, Winje said.

The regional district is asking people to call if they see anything that causes them concern. Residents are also advised to have emergency kits ready for any kind of event, like wildfires or floods, and they are encouraged to sign up for the region’s emergency alert system.