Large earthquakes are more probable during periods of high tidal stress, according to a study published in the journal Nature Geoscience earlier this week. 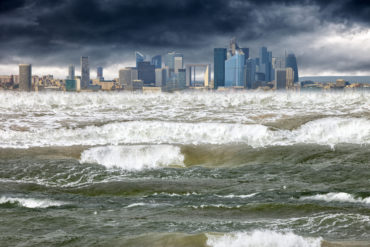 The study Earthquake potential revealed by tidal influence on earthquake size-frequency statistics from researchers at the University of Tokyo was published online on Monday.

The study noted that the possibility that tidal stress can trigger earthquakes has long been debated, and in particular, “a clear causal relationship between small earthquakes and the phase of tidal stress is elusive.”

“However, tectonic tremors deep within subduction zones are highly sensitive to tidal stress levels,” the study said, “with tremor rate increasing at an exponential rate with rising tidal stress. Thus, slow deformation and the possibility of earthquakes at subduction plate boundaries may be enhanced during periods of large tidal stress.”

For the study, the researchers calculated the tidal stress history, and specifically the amplitude of tidal stress, on a fault plane in the two weeks before large earthquakes globally, based on data from global, Japanese and Californian earthquake catalogues. For example, calculations of rankings were made for all events in the Global Central Moment Tensor catalogue exceeding magnitude 5.5 (Mw 5.5). “For more than 10,000 events of ∼Mw 5.5 in the catalogue, an event that occurred under a large tidal stress had a greater likelihood of growing to an Mw >8 event,” the study found.

“We find that very large earthquakes, including the 2004 Sumatran, 2010 Maule earthquake in Chile and the 2011 Tohoku-Oki earthquake in Japan, tend to occur near the time of maximum tidal stress amplitude,” the authors added, noting that “this tendency is not obvious for small earthquakes.”

The researchers also determined that the fraction of large earthquakes increases (the b-value of the Gutenberg–Richter relation decreases) as the amplitude of tidal shear stress increases. They concluded that a final earthquake size could be estimated probabilistically. For example, for b-values of 1.1 and 0.9 (corresponding to periods of low and high stress, respectively), the probability that an Mw 5 event will grow to an Mw 9 event is increased by a factor of six under high-stress (low b-value) as compared to low-stress (high b-value) conditions. “If the same mechanism operates starting from Mw 1 events, the increase in probability would be by a factor of ∼40. Thus, knowledge of the tidal stress state in seismic regions can be used to improve probabilistic earthquake forecasting, especially for extremely large earthquakes.”