MINTO, N.B. – A large fire that produced plumes of smoke that could be seen several kilometres away has destroyed a New Brunswick community’s only grocery store. 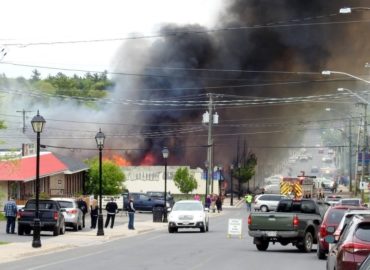 The fire at the Foodland on Main Street in Minto, N.B. created large plumes of smoke that could be seen several kilometres away. Credit: @jim_nb1.

RCMP Cpl. Kevin Jones said the Foodland on Main Street in Minto burned to the ground after a fire broke out at about 7 a.m. Monday and spread quickly through the large building.

He said two employees were in the structure at the time, but managed to get out without injury.

“The building’s going to be a total loss,” Jones said from Minto, about 50 minutes east of Fredericton. “It was fully engulfed quickly and there was large smoke.”

He said several fire departments from as far away as Fredericton were called to the scene to battle the blaze. Eyewitnesses said flames and thick black smoke could be seen kilometres away.

There were no reports of injuries, and no word yet on what caused the fire.

The RCMP had asked drivers and residents to stay away from the area as fire officials were still working on the burned out remnants late into the afternoon.

Jones said an adjacent building, believed to be a multi-unit apartment complex, was damaged by the intense heat coming off the grocery store. But he said it wasn’t clear if neighbouring residents evacuated their homes.

CTV@6: New challenges in Minto, NB after the village's only grocery store burns to the ground. Up to 40 people worked here. @CTVAtlantic pic.twitter.com/YhSMWitFfk

Scenes from the Minto fire this a.m. pic.twitter.com/cnpm63lCoL