Large-format lithium-ion batteries, such as those used in electric cars, tend to ignite more quickly in a warehouse fire and generally present a higher hazard than small-format batteries used in smartphones and laptops, according to new research. 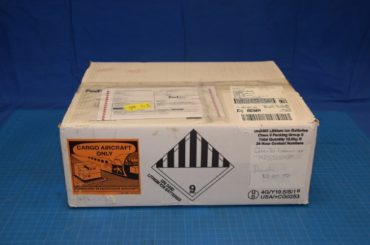 One key finding was that properly configured ceiling sprinklers can suppress a fire, whether ignited by an exploding battery or an external source. Credit: FM Global.

FM Global, one of the world’s largest commercial property insurers, released the results of its newly conducted research on Tuesday. The research was used to refine fire protection guidance for lithium-ion batteries stored in warehouses, where sometimes there are hundreds of thousands of such items stored.

Another key finding was that properly configured ceiling sprinklers can suppress the fire, whether ignited by an exploding battery or an external source. “The sprinkler system used in the large-scale fire test was sufficient to protect against a fire where the Li-ion batteries were contributing more to the overall fire severity than occurred in the large-scale test,” the report noted.

“Executives, risk managers, fire protection organizations, municipalities and insurers all need definitive, empirically conclusive information on how to cost-effectively manage this increasingly prevalent storage risk,” said Louis A. Gritzo, vice president, manager of research at FM Global, in a press release. “Now we have it.”

The tests build on FM Global’s Phase II research reported in May 2013 which, like this latest phase, was conducted in partnership with the non-profit Property Insurance Research Group and in collaboration with the National Fire Protection Association’s Fire Protection Research Foundation. Phase II research attempted to characterize the flammability of Li-ion batteries to provide the basis for fire protection guidelines of common small-format battery types in rack storage configurations. Phase I, conducted in 2011, consisted of a hazard and use assessment of Li-ion batteries, with a focus on warehouse storage.