LANIGAN, Sask. – Canadian Pacific Railway says it expects the last of its damaged cars will be removed by the end of the week from the site of a fiery derailment in Saskatchewan.

It also says in an email that staff have started scraping contaminated soil from the area, which is to be hauled away in the coming days. 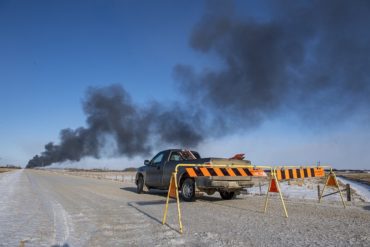 The freight train derailed Dec. 9 near Guernsey, about 115 kilometres southeast of Saskatoon, causing 33 oil tank cars and one hopper car to leave the tracks.

The Transportation Safety Board has said about 19 cars were breached and emptied of their loads, releasing 1.5 million litres of oil.

The spill sparked a large fire, which burned for about 24 hours.

CP Rail says it will implement a soil remediation plan based on the tests being done by its environmental experts in consultation with the province.

It says the duration of the work will partially depend on the weather.

This report by The Canadian Press was first published Dec. 19, 2019.