PERILS AG Friday issued an estimate of £538 million for insured property market loss from flooding damage in the United Kingdom as a result of storms in late December and early January.

Storms Eva and Frank hit the U.K. in late Dec. 2015 and that was followed by other low pressure systems in early Jan. 2016, notes a statement from Zurich-based PERILS AG, which provides industry-wide catastrophe insurance data. 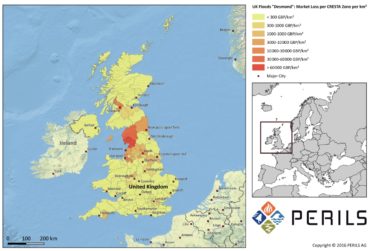 The third estimate of the insured property market loss for the flood damage relates to the period running from Dec. 25-Jan. 14.

“Windstorm losses for the same period are estimated to be in the low double-digit millions and are not part of PERILS’ flood loss estimate announced today,” the statement notes. The new loss estimate is also separate from and in addition to the market loss caused by the flooding from Desmond, which occurred from Dec. 4-25, the third estimate for which is £597 million.

“Combining PERILS’ third industry loss estimates for both events results in a total insured flood loss of £1,135 million, with 62% stemming from commercial property lines and 38% from residential property lines,” the statement adds.

“With the third loss reports for the floods ‘Desmond’ and ‘Eva-Frank,’ we are able to provide, for the first time, industry loss data for U.K. flood events at a CRESTA and line of business level of granularity,” notes Eduard Held, PERILS’ head of products. “Among others, these datasets will be useful for model calibration and market benchmarking purposes.”

The fourth flood loss report for the Eva-Frank floods is set to be released Dec. 25.